Mido is a minor character that appears in the Shin Megami Tensei series. He is the minister who runs the Cathedral of Shadows.

As the master of the Cathedral of Shadows, Mido mainly serves as the player's primary way to fuse their demons to create stronger demons and summon preowned demons from the Demonic Compendium.

Mido is encountered by the protagonist shortly after the first scenario, where he teaches him the art of fusing demons. He tells the protagonist the latter is the only one capable of saving this chaotic world. The player gains the ability to perform mid-battle fusions after.

The Cathedral of Shadows is located at various points on the world map and is described by NPCs as having mysteriously appeared out of nowhere.

The Minister first meets the Demi-fiend at the Cathedral of Shadows in Shibuya. Well aware of the Demi-fiend's destiny, he offers the cathedral's services for him and tasks him collecting all 24 Magatama. If the Demi-fiend does so, the Minister will give him the Lord's Sword, capable of opening the way to Masakados.

Mido is a digital AI downloaded onto a Samurai's Gauntlet once they buy the Fusion App that is available once it is brought up by Burroughs. He is a digital entity based on the head of his original body, with a blocky and glitchy appearance. He runs his own digital version of the Cathedral of Shadows and explains the details about fusion and summoning to the summoner. Whenever a new special fusion is possible he informs Flynn when he next uses the app.

As the game progresses new dialogue with him will appear in the talk section of the Cathedral of Shadows app, where he mentions he looks forward to working with the five new Samurai. Mido tells that he has spent his life crafting the app for use and boasts that it is the ultimate demon app. When asking "Who are you?" he will reveal that he was originally a man fascinated with demons and became a digital entity.

Talking to him at some point in Blasted Tokyo will have him mention that the server he works from can reach all sorts of places so Flynn should have no worries about not being able to connect even when in alternate worlds. Chatting with him after alignment lock has him reveal that he can go through the gauntlets data and decides to give a Challenge Quest after seeing everything Flynn has done so far. In order to have his research furthered, he gives the quest Chance meeting with a Saint to Burroughs, revealing his desire to speak with Enoch, the man who fused with an angel.

Mido returns as the master of the Cathedral of Shadows App. This time he gives voiced instructions for each segment as Nanashi uses or goes into different parts of the app the first time, noting that Nanashi does not use the Demon Summoning Program the rest use to connect to the server. Once the Divine Powers take Flynn captive he can reveal his excitement at more opportunities to fuse new demons.

Once the Tokugawa Mandala is activated, Mido is freaked out by how no one can access the app, asking Nanashi to use him as much as possible in everyone's stead so the app doesn't go out of business. During Armageddon he urges him to optimize his demons for the upcoming battle. He laughs with joy at seeing Nanashi choosing Dagda's route, happy to see a fellow who also abandoned humanity use the app and wishing for him to use it even more now that he's gone down this path. 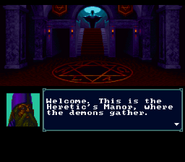 Mido as he appears in Majin Tensei

Mido as he appears in Majin Tensei: The True Remembrance

Mido as he appears in Shin Megami Tensei IMAGINE

Mido as he appears in Shin Megami Tensei IV