The Midnight Channel (マヨナカテレビ, Mayonaka Terebi)?, also known as the TV World and Mayonaka TV, is a recurring term in Persona 4. The stuff of urban legends, its existence is spread through the town of Inaba through rumors.

"You're supposed to look into a TV that's switched off, alone, exactly at midnight on a rainy night. While you're staring at your own image, another person will appear on the screen... And they say that person's your soulmate."
—Chie Satonaka

Chie Satonaka tells the protagonist and Yosuke Hanamura about the popular urban legend of the Midnight Channel while they were eating at the Junes Food Court. Earlier, she also pointed out that she heard a student had seen the Midnight Channel, claiming that his soulmate was Yamano, the TV announcer. Knowing that it would rain pretty soon, they agreed to try it out and see if the legend is indeed true.

The protagonist stays up and stares at the TV in his room when the clock struck twelve. Without warning, blurred images of a female student appeared. When he touched the screen, his hand was sucked into it. Luckily, the TV he had was too small, and his body could not fit. He managed to pull his hand away, but accidentally fell and hit his head on the table in the process, and soon went to bed.

The protagonist informs Yosuke and Chie of the incident, but both laugh it off as a joke. The protagonist finds that he retains his ability to reach through the TV by reaching into a large, widescreen TV at Junes, alarming both Yosuke and Chie. Due to a freak-accident, the three wind up falling into the TV. Upon hitting the ground, they find themselves in a strange dimension blanketed by a thick fog.

The Midnight Channel looks like a television studio, with large floodlights spread all over the place. The party discovers that Teddie is a resident in this world, along with innumerable Shadows. According to Teddie, the place a person is pushed into the TV World from the real world determines where they land in the Midnight Channel.

Victims who fall into the Midnight Channel do not attract Shadows unless the fog clears. When the fog clears, the shadows go berserk and will kill any humans trapped. Due to this, it is possible to kill victims by pushing them into the TV, but they can also be saved if they are rescued before the fog disappears. Victims who are killed in the Midnight Channel are expelled from the TV World and their corpse is found hanging from a telephone line with no physical indications of their death. If the person is too young or innocent to have a Shadow Self, its oppressive climate will instead put them into danger; even if they are saved, they will still fall critically ill due to the side effects caused by its climate.

The fog that blankets the Midnight Channel clouds the vision of anyone attempting to look through it with normal eyes. Specially made glasses created by Teddie causes the fog to disappear from the wearer's vision. Each member of the Investigation Team receives a personalized pair of glasses when they join the team and wear it through their adventures through the Midnight Channel.

When a Midnight Channel area is unlocked, the protagonist will be given a deadline to complete it, up to the next foggy day. Failure to rescue the target within the deadline will result in a Game Over. Therefore, unless one has excellent time management, clearing them if they are newly available should be of utmost priority. Midnight Channel areas can be explored any number of times, and the target at the boss floor will be replaced by a substitute boss after they are rescued.

For a long time, the purpose and origin of the Midnight Channel eludes everyone involved - it seemingly serves as a warning message of the next victim to be pushed into the TV. Several days prior, usually only a blurry image can be seen, with no audio aside from static with identity of the victim unclear. As the days pass, the image slowly becomes clearer and sometimes their voice can be heard. When the image becomes its clearest and the full voice can be heard, that usually signals that the victim has been thrown into the Midnight Channel.

In the end, Izanami reveals the truth, which they'd been mistaken about all along — the so-called "Midnight Channel" is the world of human consciousness. She merely turned television into a window into that world, then spread the rumors about it to attract the attention of those whom she had given the power to cross into it.

The result was as Adachi hoped; Namatame began kidnapping people appearing on the Midnight Channel and putting them into the television world where he thought they'd be safe. This pattern only reinforced the Investigation Team's assumptions. Their failure to recognize the true nature of the Midnight Channel also nearly drives them to throw Namatame into a television as execution, when his Shadow's image appears on television right in front of them all and gloats about his guilt. In fact, they all saw that because they believed Namatame was guilty, and the television was merely reflecting what was in their thoughts.

In the end, defeating Izanami prompts her to lift the fog from the Midnight Channel world, revealing a beautiful landscape which Teddie vows to protect. The Shadows attacked the Investigation Team and the initial murder victims because they were comfortable in their clouded delusions and despised any source of truth. With that temptation gone, the Shadows have apparently become relatively peaceful.

Midnight Channel reappears as one of the DLC stages.

The Investigation Team enter the movie world via the Midnight Channel. During a planned regular exploration trip, they enter the TV in Junes that they used to enter the Midnight Channel, but it brings them to a strange dimension with a movie screen initiating a countdown instead of the supposed lobby. They were sucked into the screen, ending up in Junessic Land.

"My world is a place shaped by human thoughts..."
—Teddie

The Midnight Channel contains dungeons that materializes the dreams and desires of those trapped inside. Within the dungeons are the Shadows: suppressed feelings and emotions within humans. Extra dungeons were added in other Persona 4 series of games; Persona 4 Golden added a dungeon that can only be accessible once along the storyline, while Persona 4 Arena created a high school-like setting for the tournament.

^Access varies depending on Player Character of Story Mode, listed as follows:

Players can refer to the map of every dungeon by pressing the "Start" button. The map has different symbols to denote the elements of a dungeon. 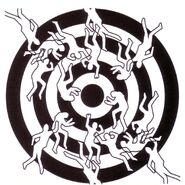 Panel found on the floor of the Midnight Channel.

Concept artwork of the Midnight Channel.

The entrance hall as depicted in the manga.

Appearances in other media