Stephanie Sheh
"You know... I think you can spread the message now... Not with words alone... but with everyone's passion and strength... If you could do that... He wouldn't have to bear the burden all alone, would he...?"
—Metis, Persona 3 FES: The Answer

Metis is an exclusive character in the playable epilogue of Persona 3 FES, titled The Answer. She is symbolized with a wreath of red butterflies and known to be fiercely protective of her "sister," Aigis.

Metis is a humanoid android and the same model as Aigis. She has a golden helm-like headpiece with a red butterfly visor. Her skin is pale, she has black hair and red eyes. As an android, her body is mostly mechanical. Her armored body is black, though her right arm is white almost to resemble a long extended glove. She has a metallic "skirt" which continues the red butterfly motif.

"I went to see you so I could save you, but I ended up causing the power to awaken... That's why I made up my mind. I'd do anything to protect you. Even... even if it meant you'd hate me for it... You're all I have in the world..."
—Metis to Aigis, Persona 3 FES: The Answer

Metis has a childlike personality, to the point of being compared to a child by Junpei, something she takes offense to. She recognizes Aigis as her "sister," and as a result tries to protect her from harm. She cares for Aigis deeply and is willing to do anything to protect her, even if it means she'll hate her for it. This is shown when she attempted to kill the other members of SEES, whom she believed (correctly) were responsible for the Abyss of Time's manifestation. She also gets angry when Akihiko suspects her of having an ulterior motive for protecting Aigis, insisting that she's doing it because she cares about her and nothing more.

In the beginning, Metis is quite rude and even shows some slight entitlement issues, as she fully expects the group to trust her and follow her blindly into the Abyss, apparently not realizing they have every reason not to trust her since she first appeared to them as an enemy. After they threaten to explore the Abyss without her, however, she apologizes and is accepted into SEES at the approval of Aigis, who allows Metis to call her 'sister.' She also agrees not to hurt the others at Aigis' request, though she still remains rather indifferent to them, and they in turn remain hostile towards her, especially Akihiko, who fully expects her to turn on them again at any time.

Although she usually acts like a child, Metis is frequently shown to actually be very intelligent; she is the one who figures out how the Abyss came to be, guessing correctly that the rest of SEES played a part in it. She also knows that Personas and Shadows are one and the same, something the rest of SEES never figured out despite fighting them for months (or, in Akihiko and Mitsuru's case, years). This fits with her Arcana being the Hierophant, a figure that interprets sacred mysteries or esoteric/obscure principles. Finally, she figured out that Nyx is neither hostile nor malevolent and that there must have been some other reason for the Seal.

Metis can also be quite insecure. Being a new member of SEES, she doesn't know about the rest of the group's shared past and feels lost whenever they talk about it. Junpei claims that she's lonely, which is why she feared that they would leave her behind. Indeed, Metis is shown frequently to hate being alone, which is why she panicked when the group suggested exploring the Abyss of Time without her and begged them not to leave her behind. This is due to the fact that she has no memory of who she is, only that Aigis is her sister and that she has to protect her.

Being the embodiment of Aigis' rejected emotions, Metis is very similar to her in some ways; they're both hostile to those they perceive a threat, have attachment issues and overprotective to those close to them. However, Metis is more outspoken of what she thinks when compared to her "sister," and overall just more emotional. Aigis even notes at one point that she reminds her of so many things she thought she had left behind. Once everyone begins fighting for the keys, Metis sides with Aigis and claims that she was created to facilitate the fighting, returning to her previous hostility toward the rest of SEES, but at the cost of Aigis' trust. After the conflict between the group is resolved, Metis feels guilty over causing so much trouble, and so fully expects the rest of SEES to leave her behind. However, the rest of the group assure her that they brought the fighting upon themselves and Aigis forgives her, reminding her that she promised she wouldn't leave her behind. The two sisters then reconcile, with Metis shedding tears of joy.

"Sister... All live shares a "sea" deep within its soul. I think... that's where I came from. Your heart is connected to that sea as well... You're truly alive now. From now on... we'll always be together. Sister... I'm coming home."
—Metis, Persona 3 FES: The Answer

Metis is a character from Persona 3 FES's playable epilogue, The Answer. Metis replaces Aigis' role as an Orgia Mode user, as Aigis loses hers due to her new ability to use the Wild Card. Instead, Metis has access to an improved "Neo" Orgia Mode, which not only boosts her offenses but also lets her use her skills at no cost. She also appears to replace the deceased Shinjiro Aragaki, with both of their personas being of the Hierophant Arcana and their ability to use bludgeon-class weaponry, as well as having similar behavior in battle.

Following after the protagonist's death and the defeat of Nyx, the remaining members of SEES decide to regroup one last time before their dorm closes. During their reunion, SEES encounters a weird atmosphere, in which time would stop flowing, resetting each time the clock passes midnight. This is where Metis is first seen and assaults SEES. Upon seeing Aigis, she claims to be Aigis' sister, and exclaims that she was tasked to protect her. She views the remaining members of SEES as a hindrance, and thus, wants to destroy them.

After Aigis loses consciousness due to overusing Orgia Mode to subdue her, Metis participated in upgrading Aigis' body parts. However, she was later chained for further questioning. Metis later leads the members of SEES to the Abyss of Time, a labyrinth below the dorm. There, Metis explains that the Abyss of Time was created by the members of SEES, but refuses to reveal the cause. Since the creation of the labyrinth was SEES' responsibility, Metis believed that once SEES has been annihilated, time would flow once again.

Due to her attacking SEES earlier, the members initially show hostility towards letting her joining SEES. Metis harbors a great dislike towards them as well, with the exception of Aigis. Metis eventually joins SEES when Aigis threatens to leave her alone, much to her horror and grief. Throughout their journey, Metis appears to be protective of Aigis, and addresses Aigis as her sister. She is also seen to hold a certain understanding towards the nature of the Abyss of Time and, among others, the protagonist and Nyx.

Later, defeating the manifestation of SEES' negative wills and desire of seeing the protagonist, SEES realizes that they have the ability to travel back to the time to when the protagonist sealed Nyx. However, each member has their own opinions on doing so. Yukari wants to return to the past to stop the protagonist's actions, but is opposed by Junpei, who explains that changing the past would essentially undo the sealing of Nyx.

As their opinions differ, SEES was separated, leaving only Metis and Fuuka standing on Aigis' side. Aigis would eventually team up with Metis and Fuuka to reclaim the keys to unlock the past given to SEES members. Upon recollecting them and forging into the 'true key,' Aigis decides to return to the past where the protagonist performs the miracle of sealing Nyx so she could understand the reason for the protagonist's death. However, as Ken mentions their luck of having the door to Paulownia Mall to not yet vanish, Metis and Mitsuru quickly realize that because said door has not yet vanished, meaning that its purpose has not yet been fulfilled (which is to prepare them for battle), their battles are not yet over. During this time, Metis expresses her confusion at the protagonist's actions, as Nyx herself was neither hostile nor malevolent, and a seal wasn't necessary. She would also mention SEES' promise of meeting each other in Graduation Day, much to the suspicion and confusion of SEES. When SEES tries to question her true identity, Metis replies that she "just knows it," and explains that the protagonist wasn't exactly planning to seal Nyx, but Erebus, a grand manifestation of humanity's grief from contacting her to bring forth the Fall.

Metis' true identity is finally revealed late in-game, where SEES was transferred into the Velvet Room. In there, the members of SEES appear in front of Igor. Metis, seemingly familiar with the Velvet Room, appears alongside Igor. Metis explains that she comes from "the other side," which is actually the manifestation of the emotional side of Aigis, separated from Aigis after Aigis wished to return back to being fully machine to escape the emotional burden of losing the protagonist. Due to this, Metis often feels helpless when Aigis threatens to leave her during their fight with the other party members, as such an action would leave her all alone, like when Metis was first formed. Finally knowing Metis' true nature, the sisters reconcile, with Metis returns into Aigis, fully completing Aigis' Journey. Metis' voice is last heard when Aigis unlocks the door of the dorm, where she encourages Aigis to make the most out of her life and hopefully, her actions would influence the others, so the protagonist's burden would be lightened.

The battle with Metis at the beginning of The Answer can only be lost if she lands a critical hit- if Aigis runs low on health, Metis will begin to "hesitate."

Cut-in with her visor on while fighting against Aigis 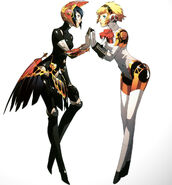 Metis first appears in the anime cutscene of The Answer.

Metis and Aigis skirmish in The Answer. 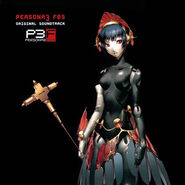 Metis on the soundtrack cover

Kanami as Metis in Persona 4: Dancing All Night 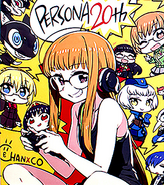 Metis on the cover of Weekly Famitsu volume 959