Messiah is a Persona in the series.

The term messiah (in Hebrew) or Christ (in Greek) is prominent within the world's many religions, especially in the Abrahamic religions Judaism and Christianity. A messiah is regarded as a savior of mankind who would bring them salvation near the end of days, although opinions between who the term messiah refers to differs between religions.

The most common opinion in the West is the Christian one, which holds that the messiah is Jesus Christ. Other messiah figures have appeared in both history and myth and people have placed their hopes in them for salvation, Buddha, Krishna and Maitreya being examples.

"Appears before Judgment Day to save the virtuous. He is a universal figure, appearing in myth around the world. Many stories involve his death and rebirth."
—Persona 3 compendium

Messiah is the highest-level Persona in Persona 3. It is the final Persona of the Judgement Arcana, which can only be accessed by venturing to the final level of Tartarus. Messiah can only be obtained by fusing Orpheus and Thanatos in the Velvet Room once the protagonist reaches Lv. 90 or above.

Unlike other Personas, Messiah is capable of producing more than one type of item:

These items are the strongest equipment in the game.

Aigis can summon Messiah once she has reached Lv. 90 or above. As The Answer does not use the Social Link system, maximizing the Judgement Arcana is not necessary, however creating Messiah still requires fusing Orpheus and Thanatos.

In Winter of Rebirth, Makoto fuses Orpheus and Thanatos into Messiah to destroy the regular Shadows on the top of Tartarus before using it ascend into Nyx's true body.

Immediately after both the P3 Hero and P4 Hero reach level 55, the request, The Power of the Wild Card, becomes available. The request for just the two Heroes to fight Margaret in You in Wonderland Chapter 3. Immediately after the fight, Orpheus evolves into Messiah and Izanagi evolves into Izanagi-no-Okami. Due to the two Wild Card users being brought together, similar to everyone being able to equip two Personas, once the two Heroes attain their ultimate Personas, everyone else is able to as well, with their Personas evolving once they reach level 55. Each ultimate Persona has one skill, unique to it, Messiah's being Debilitate, which greatly lowers one enemy's attack, defense, hit and evasion for 3 turns.

"A Persona of another story. He appears before Judgement Day to save the virtuous. He is a universal figure, appearing in myths around the world. Many stories involve his death and rebirth."
—Persona 5 background

Messiah is a DLC Persona. Upon his purchase, the protagonist is also given access to Messiah Picaro. Both forms have access to the unique skill Oratorio, which cannot be passed down to any other Persona. When using Oratorio, the protagonist will say one of two unique voice lines, those being "I can't fall!" and "Reverberate... Oratorio!"

Messiah is the ultimate Persona of the P3P heroine, which can be acquired after she defeats all of the Velvet siblings in combat.

Messiah appears alongside Izanagi, Thanatos and Pallas Athena as one of the Personas featured in Lord of Vermillion Re: 2. Messiah appears as Aigis EXO's Persona and enables Aigis to use Orgia Mode EX, which greatly enhances her stats and enables her to use Megido Fire EX as her normal ability. 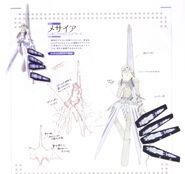 Messiah in the Persona 3 Compendium.

Messiah as he appears in the Persona 3 The Movie 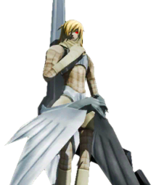 Messiah in Persona Q: Shadow of the Labyrinth

Messiah being invoked in Persona Q: Shadow of the Labyrinth

Messiah in the Persona 5 Royal

Messiah Picaro in the Persona 5 Royal