Orion Acaba
"You still will not fall? You are truly the embodiment of filth. Nonetheless... just as darkness is pierced by light, your defeat is part of the natural order of things. Now learn of the humans' filth and its powerlessness before my light!"
—Merkabah's second form in Shin Megami Tensei IV

Merkabah is a demon first seen in Shin Megami Tensei IV and an important character in the duology. He is the chief representative of Law there.

Merkabah, also known as Merkava or Merkavah, is the throne chariot of God. It is a four wheel vehicle driven by the chayot which are living creatures with four wings and four faces. According to Ezekiel, it is a chariot made of many angels driven by the "likeness of man." Merkabah is made of many ophanim, seraphim and chayots.

Merkabah mysticism (or Chariot mysticism) is a school of early Jewish mysticism, centered on visions such as those found in the Book of Ezekiel chapter 1, or in the heikhalot ("palaces") literature, concerning stories of ascents to the heavenly palaces and the throne of God.

In the Shin Megami Tensei IV duology, Merkabah is depicted as extremely arrogant, condescending and overzealous, going as far as calling the people of Tokyo "filth." He obsesses in cleansing all of Tokyo with the Yamato Perpetual Reactor, even if it would mean his and his follower's demise, believing that cleansing them will ascend them to a higher existence.

Much like his counterpart Lucifer, he is also an ideological supremacist and simply believes that anyone who does not believe in Law doesn't deserve to exist, albeit unlike his Chaos counterpart who often puts up a facade of nobility, Merkabah constantly goes ranting about how vile and abhorrent his adversaries are, usually outright insulting them as "filth" in a repetitive fashion. His ideological supremacist tendencies are further displayed when a majority of his ranks end up consisting of Abrahamic angels, while the forces of Law had traditionally accepted pagan entities in their ranks. Despite all of this, it is hinted that Merkabah is not entirely evil, as he does feel sympathy for Isabeau's fate following her death in the Law route. In addition, Merkabah is capable of feeling and expressing strong emotions, such as anger at the protagonist for choosing the path of Chaos.

In Apocalypse, his negative traits are made worse, since he denounces anyone who does not agree with him or his version of Law as filth and even openly turns on his associates when they betray him in favor of humanity. He also has no regard to his actual followers and has no qualms deceiving them, for he still sees them as Tokyo filth and plans on killing all of them if he ever got his way. He even has no regard for himself and even declares that he himself is unclean; if Nanashi ever sides with him, he will sacrifice himself alongside Nanashi to the Yamato Perpetual Reactor.

"I am the Lord's chariot...the seraph Merkabah. Foolish ones who churlishly refuse the hand of salvation that the lord has extended to you...I shall reduce you to ash for the sake of a new millennium of order."
—Merkabah in first form during confrontation in Neutral Route

Merkabah is the main antagonist of the Chaos route, but a major ally replacing Jonathan in the Law route. He is a guest ally/enemy limited unit and cannot be recruited or fused.

After the events of the Monochrome Forest in the Law Path, Jonathan and Flynn awaken at the new Cocoon of Shene Duque and are greeted by the four archangels, who call the place the new Mikado Castle. They are informed of Lucifer's return and of how the Yamato Perpetual Reactor has been turned on, releasing hordes of demons upon Tokyo, who would seek to break free through the Eastern Kingdom of Mikado.

Unwilling to allow this, the four have sealed Naraku; but they lack the power to strike against Lucifer. To attain the necessary power to do so, they ask one of the two prentices to fuse with them to summon the Chariot of God, Merkabah, a being powerful enough to fight Lucifer himself. Though Jonathan is horrified at the archangels' plans of annihilating Tokyo and at the fact that whoever enters the fusion will be killed in all but name, the prospect of ensuring Mikado's safety and stability for all eternity is enough to convince him to enter martyrdom by sacrificing himself to Uriel, Raphael, Gabriel and Michael, summoning Merkabah.

In the Law route, Flynn and Merkabah defeat Lucifer to prevent further corruption of the people of Mikado. After that, Merkabah overloads the Yamato Perpetual Reactor to destroy Tokyo with a black hole, killing both himself and Flynn in the process to purge their own taint. In the Chaos route, Flynn and Lucifer defeat Merkabah in order to overthrow the Millennium Kingdom. In the Neutral route, it is revealed Merkabah is created from the Great Spirit of Goodwill which is being used by the angels to blindly preserve. Flynn and Isabeau team up and kill Merkabah to retrieve the Great Spirit of Goodwill in order to reawaken Masakado to his full form.

"Sometimes called the "heavenly chariot" or the "throne of God." Described as having four faces and four wings in Ezekiel. There is also a form of meditation that invokes Merkabah used to connect to a higher realm. The ritual is quite dangerous, so caution is advised"
—Shin Megami Tensei IV Apocalypse compendium

Jonathan had agreed to enter martyrdom, and sacrificed himself to the archangels, leading to Merkabah descending down into the world; and began the war against Lucifer. Their conflict reaches even Tokyo. This later changes with the appearance of Krishna, the leader of the Divine Powers. Krishna claims that he is here to save humanity, in exchange for them offering their souls. Merkabah and Lucifer rebuke him by saying that humanity is their property, and reluctantly form an alliance to deal with the group of polytheistic gods. Merkabah promises that he will unleash elite Samurai known as "Warriors of Light" into Tokyo, each of them chosen in the name of god, with the fleet's captain being Gaston.

Merkabah then appears in Armageddon standing off against Lucifer in front of the Yamato Perpetual Reactor. He appears as highly arrogant and looks down on anyone who opposes him, going as far as repeatedly calling all of those who resist "filth." Despite his threats, his tone of speech did not show any form of malice. He also promises his Tokyo followers a peaceful life above the Firmament in Mikado if he ever won; in reality, he was deceiving them and he planned on killing them instantly with the Yamato Perpetual Reactor should he ever win. Despite his general ignorance and aloof attitude, just like Lucifer he treats "Flynn" (who is actually impersonated by Shesha) as if he were Shesha instead of Flynn, even calling him out as the "False Messiah."

He then offers Nanashi the option to join him. Joining Merkabah will result in a confrontation with Lucifer, followed by a bad ending. If he doesn't, as a last ditch attempt he would call Gaston to kill Nanashi with Michael's Spear, but Gaston betrays him by breaking the spear and awakening, causing intrigue upon the Samurai. Leaving no options, he will then attack the party. Lucifer will offer Nanashi to join his cause after he slays Merkabah. Refusal will result in a confrontation with Lucifer as well, and the party may progress further into the next sequence of events once Nanashi slays him. Should Nanashi accept Lucifer's offer, it will result in another bad ending.

If Nanashi accepts Merkabah's offer, all of Nanashi's partners and Dagda will desert and Lucifer will confront Merkabah and Nanashi. No allies will join the fight against Lucifer alongside Nanashi save for Merkabah. If Lucifer is defeated this way, Merkabah will order Nanashi to activate the Yamato Perpetual Reactor, which he does obediently and it destroys all of Tokyo, taking himself and Nanashi down alongside it. The Eastern Kingdom of Mikado is restored to a new age of peace, but Flynn remains confronting the Gods and Jonathan comments that he must be dealt with later on.

It is eventually revealed that Merkabah, along with Lucifer, are actually two halves of the being known as Satan. Created for the purpose of serving YHVH, Satan split its essence into two beings for the purpose of starting a pointless war in order to keep its creator in power. However, Satan grew to doubt God, and upon learning that the Great Will created Nanashi and Flynn as saviors, he decides to test them in combat. In the Anarchy Ending, Satan helps the two kill YHVH, despite knowing it would mean his end. In the Peace Ending, Satan restores life to Jonathan and Walter, long enough for them to defeat YHVH.

Merkabah, along with Lucifer, can be fused in the Cathedral of Shadows as a New Game Plus demon.

Only Form 2 can use Hexagram & Shalt Not Resist. 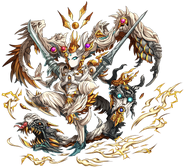 Merkabah as he appears in Brave Frontier