Mephisto, also known as Mephistopheles, is a demon in the series.

Mephistopheles (whose name means "Not Loving Light"), also known as Mephistophilus, Mephistophilis, Mephistopholes, Mephostopheles, Mephisto and many other variants, is one of the seven princes of Hell. Originally appearing in literature as the name of the demon in the Faust legend, he has since appeared in other works as a stock character version of the devil himself.

Mephistopheles is the demon associated with the Faust legend, where the German magician Johann Georg Faust summoned Mephistopheles at a crossroads for everything he wanted. Due to this and his connection with the devil himself, some picture him as king of the crossroads, which means he is the ruler of the demons that can be summoned at crossroads. The crossroad demons are even believed to be the "children" of Mephistopheles.

Although Mephistopheles is a worker for Lucifer, some claim that he does not search for men to corrupt, but comes to serve and ultimately collect the souls of those who are already damned. He appears because he senses in Faustus' magical summons that Faust is already corrupt, that indeed he is already in danger to be damned. Mephistopheles is already trapped in his own Hell by serving the devil. He warns Faustus of the choice he is making by selling his soul to the devil.

He was especially prominent in the versions by Marlowe and Goethe. His name was also mentioned in passing in Shakespeare's "Merry Wives of Windsor."

Mephisto can be obtained in Rag's Jewelry after obtaining the required jewels.

Along with Belial, Baal and Lucifer, Mephisto is one of the four Gaia Masters responsible for the monster outbreak. Shortly after revealing his role in manipulating the Zord organization to do the Masters' work, he is battled and slain. However, he secretly survives by devouring a monster, reincarnating him in a more demonic form, which can be fought at one of the shrines. Unlike the other Masters, he cannot be recruited after Lucifer is defeated.

Mephisto is a minor antagonist and a servant of the Ice Apostle. He appears alongside the angels invading the earth, kidnapping children for their plans. He brings a "gift" for Jin that takes away the power of Rand and reverts him back to his original form. Later, he confronts Jin again and the two battle. However, it is revealed after the fight that he was an illusion. He is faced for the last time in the Ice Apostles Castle, where he once again attempts to take away Rand's power before being defeated.

After going on the quest to find all the revived servants of Ice Apostle, Mephisto will reside in a hut found in Sunefiyoru.

Mephisto is fought in the DLC quest "A Trip to Hawaii."

After accepting the quest, he appears before Nanashi, offering a contract that allows him to experience the joys of a faraway tropical island, a luxury not known to people of his time. Nanashi can end it at any time with the phrase "Stay, thou art so beautiful." Should Nanashi accept, he gets drawn into an illusion where he enjoys his time at the beach with his companions. But eventually, Nanashi is sent into a loop of events that can only be broken with "Stay, thou art so beautiful," as agreed on the contract. Mephisto then attacks Nanashi to collect his payment of Nanashi's soul.

Alternatively, before the illusion even begins, Nanashi can opt to say "Stay, thou art so beautiful." Mephisto is amused at his impatience, and attacks him regardless.

Mephisto is fought twice in quick succession, with Dagda intervening to break Nanashi out of Mephisto's grasp. Defeating Mephisto unlocks him for fusion.

"More accurately, Mephistopheles. He is one of the princes of Hell and his name means "he who loves not the light".
He is commonly known as the demon summoned by Georg Faust. Other than Satan himself, he is the most feared commander in Hell. However, he despises having fallen into Hell and hates any and all humans who have been granted salvation. He is rather knowledgeable in the realms of astronomy, astrology and meteorology in addition to being a skilled illusionist who can manipulate all five senses."
—Shin Megami Tensei V lore

Mephisto is the central demon of the quest in the DLC "The Doctor's Last Wish". After the protagonist goes looking for a missing Bethel researcher on another's behalf, he encounters the two. Mephisto had made a pact with the researcher to see the creation of a proto-human and attacks the protagonist to claim his soul. Upon his defeat, he leaves the area and with the contract fulfilled, he claims the researcher's soul, killing him when his body rapidly returned to his true age. He leaves behind a Dark Contract, allowing Bethel researchers to summon him to join the protagonist's party and gaining the ability to fuse him. Mephisto requires a special fusion of Sraosha, Orobas, Kaiwan and Belphegor.

Mephisto has two signature skills; Walpurgisnacht, which deals Dark damage, and Stagnant Air, a debuff which can inflict Mirage and lowers enemies' Defence and Accuracy/Evasion by a rank for three turns. 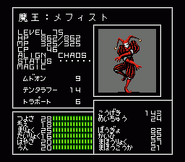 Mephisto from the Sega CD remake of Shin Megami Tensei. 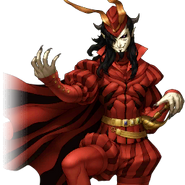 Mephisto as he appears in Shin Megami Tensei V