This is the first Megami Tensei game to feature the artwork and character design of Kazuma Kaneko.

The gameplay is similar to Megami Tensei; a first-person dungeon crawler with turn-based combat where the hero talks to, battles, and recruits demons. However, the overall game features a number of improvements. One improvement is having an overworld map with a top-down view of the protagonist, similar to other Famicom RPGs such as Final Fantasy or Dragon Quest. Also, this game introduced the stick figure enemy number, status symbols, and multiple endings.

In the year 199X, the world was demolished with a bombardment of missiles, and the survivors of the cataclysm were forced to live in shelters. It's now the year 2036, and two friends are playing a video game called 'Devil Busters' in the Keihin (京浜) shelter No. 3. Shortly after they beat the first boss, they unseal Pazuzu. The demon gives them the Demon Summoning Program in hopes of using it for the defeat of Bael along with a warning of a coming menace. Demons then begin to raid the shelter and the two friends must save the remains of humanity.

Later on, once they meet the Partner and the hero agrees with her, the friend leaves the hero, saying that the next time they meet would be as enemies. The friend later transformed himself into the Dark Hero and repeatedly attempted to halt their advance. As the two traveled across the land, they gathered the Seven Pillars of Solomon, at the cost of the hero's arm, slew Pazuzu, and defeated Bael, who had killed the Dark Hero. After defeating Bael, however, he took frog form and was taken with them. With the aid of Masakado, the two use the Seven Pillars to gain access to the Expanse. Once there, the two begin fighting their way through the demon lords who rule over the planes of the Expanse. Once they reach Astaroth's Castle in the Lost Woods, the partner is captured by Astaroth, but is later saved by the hero. Later, in Beelzebub's Maze on Mount Fear, the two confront Beelzebub, who fuses with Bael and becomes Baal. The two then confront Lucifer, however Baal manages to convince Lucifer of the two's good intentions, allowing him to join their party.

With Lucifer at their side, the two return to Tokyo and begin investigating Suzuki Company Ltd.. There, they learn from a decapitated head that the head of the company is not a normal human and that they should be wary of him. Shortly after, they are confronted by Asura, but Lucifer convinces him to side with them, transforming him into Ahura Mazda. The party meets Mr. Suzuki after slaying Belphegor, who reveals himself as Satan, the figure responsible for the nuclear war and the demon invasion, and attacks the party. After Satan's defeat, if the hero recruited Lucifer, the party is teleported into the presence of YHVH. YHVH offers them one more chance to betray Lucifer and offers to make them into gods, but they refuse and do battle with YHVH.

After YHVH's defeat, the two are teleported back to the hero's home in the bomb shelter. Lucifer gathers all the demons and returns them to the Expanse to help humanity rebuild. The two return to the surface and watch as power and life returns to the ruins of Tokyo.

If the player decided not to take Bael along as a frog or disagreed with Lucifer, YHVH will reward the Hero and the Partner by making them into gods and bringing them to Heaven, but in the true ending it is implied that doing this would have doomed humanity. 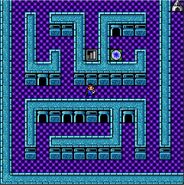 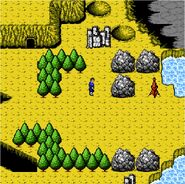 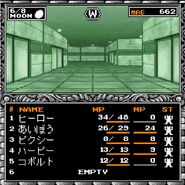 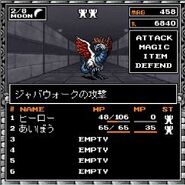 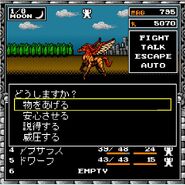 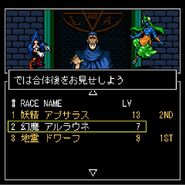