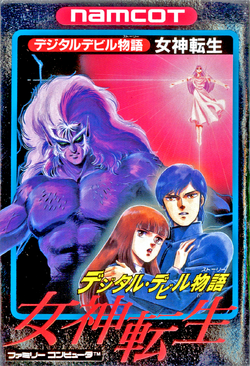 It was later enhanced-remade along with Megami Tensei II in a Super Famicom games known as Kyuuyaku Megami Tensei.

A large part of the game is devoted to scrolling, three-dimensional dungeon, something which was quite revolutionary for it's time. The game pioneered many of the features which are now trademarks of the Megami Tensei franchise. It, along with Square's Final Fantasy and Enix's Dragon Warrior, set the standard for console RPGs, and each game managed to spawn a series which would take these different formulas to new heights.

The game also focuses very heavily on demons, which have gone on to become a trademark of the series. It was later followed by a sequel, and then by the follow-up Shin Megami Tensei, (a name that would be used by most future games in the franchise). There have also been many spin-off series, including the Last Bible trilogy, Majin Tensei series, the Persona games, and the Avatar Tuner dualogy.

Retrieved from "https://megamitensei.fandom.com/wiki/Megami_Tensei?oldid=10309"
Community content is available under CC-BY-SA unless otherwise noted.