Nintendo Switch
October 2020 (Namcot Collection DLC)
Digital Devil Story: Megami Tensei is the first of two games in the Megami Tensei series released for the Family Computer. It started the Megami Tensei franchise as we know it, though a related title of the same name was released for various computers some months earlier. The game's title refers to Yumiko Shirasagi's true identity as the reincarnation of the great goddess Izanami.

An enhanced remake of this and Megami Tensei II was later released for the Super Famicom, titled Kyūyaku Megami Tensei. The original game was also later ported to mobile devices.

On June 18, 2020, Bandai Namco announced that Megami Tensei would be a part of the third DLC wave for the Namcot Collection on Nintendo Switch.

"Akemi Nakajima, a programming genius, invented a Devil Summoning Program. But after gaining physical bodies, the demons Loki and Set attacked the summoner. He was saved by a mysterious transfer student, Yumiko Shirasagi. Nakajima and the magic-wielding Yumiko joined forces and repelled the demons... However... The demons have not surrendered. Lucifer, a once beautiful angel who was cast into Hell, is planning to conquer the human world! A demonic palace has appeared in Asuka... where the tomb of the goddess Izanami rests under Shirasagi Mound. The powerful Izanami has been captured by Lucifer, and her chamber sealed within the palace. To save Izanami... defeat the resurrected Loki and Set, and Lucifer himself, Nakajima and Yumiko walk through the palace's entrance... But will they ever be able to return to the surface...?"
—Megami Tensei (KMT) Intro

Set after the events of the original novel and its sequel, the game's plot begins with the demon lord Lucifer having taken Izanami hostage and raising a massive labyrinth at the Shirasagi Mound, as well as reviving the previously slain demon lords Set and Loki to serve as his minions. Akemi Nakajima, armed with his Demon Summoning Program, and Yumiko Shirasagi enter the labyrinth to rescue Izanami and defeat Lucifer.

A large part of the game is devoted to navigating a scrolling, three-dimensional dungeon, something which was quite revolutionary for its time. The game pioneered many of the features which are now trademarks of the Megami Tensei franchise. It, along with Square's Final Fantasy and Enix's Dragon Quest, set the standard for console RPGs, and each game managed to spawn a series which would take these different formulas to new heights.

The game also focuses very heavily on demons, which have gone on to become a trademark of the series. It was later followed by a sequel, and then by the follow-up Shin Megami Tensei, a name that would be used by most future games in the franchise. There have also been many spin-off series, including the Last Bible series, Majin Tensei series, the Devil Summoner series, the Persona series, the Digital Devil Saga games, and the Devil Survivor series. 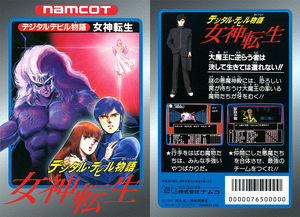 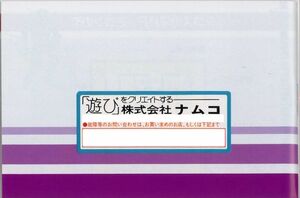