Megami Ibunroku Persona is the first game in the Persona series, which is a spin-off of the Shin Megami Tensei franchise developed by Atlus. In North America it was localized as Revelations: Persona.

Atlus has released an enhanced remake for the PlayStation Portable, entitled Shin Megami Tensei: Persona (solely Persona in Japan) with the words Megami Ibunroku omitted from the title. Shoji Meguro returns as the composer.

Set in 1996, Megami Ibunroku Persona centers around the protagonist and his classmates at St. Hermelin High School in Mikage-cho (Lunarvale in Revelations: Persona). Hidehiko Uesugi talks all of his friends into playing a game called "Persona", which is played much like the ritual game "Bloody Mary". While playing, the students lose consciousness and meet Philemon, who gives them the ability to summon reflections of their personalities, which are known as Personas.

A short time later, the protagonist and several of his friends go to visit Maki Sonomura, who is ill and bed-ridden. During their visit, they discover that the town is changing and demons are roaming the streets. The party is told by Maki's mother, an engineer working for SEBEC, that the culprit behind the incident is Takahisa Kandori, president of the company.

After taking Maki's mother to the school (the only place in town safe from demons), the protagonist's actions decide the course of the story. If the protagonist opts for going after Kandori, it'll start the SEBEC Chapter which is the main storyline of the game. Alternatively, the protagonist may opt for investigating a series of incidents that occurred in the school eight years ago and start the Snow Queen Quest, an alternate storyline unrelated to the SEBEC incident.

In the SEBEC route, should the protagonist decide to confront SEBEC, he is first joined by an apparently-recovered Maki, then asked by Nanjo to help save Masao, who is captured by demons. The protagonist, Maki and Nanjo rescue Masao, but on the way Maki displays an odd lack of certain memories including being hospitalized.

After rescuing Masao and infiltrating SEBEC, the group confront Kandori. After cornering him inside the DEVA System, a girl in black called Aki appears and knocks the party unconscious. When they awake, they find themselves in a duplicate, idealized version of their world.

The group eventually find and corner Kandori, whose ultimate goal was to become a deity and find meaning in life. After an initial fight, Kandori is possessed by his Persona Nyarlathotep, then finally defeated. Before dying, Kandori reveals that the Maki who has been traveling with the party is the "Ideal Maki", a version of herself from the true Maki's heart. Aki and a girl in white called Mai are also pieces of Maki, and the idealized Mikage-cho was created by Maki, and brought into reality when she unexpectedly linked with the DEVA System.

The group must help Maki avoid Kandori's path towards isolation and his current actions. The group manage to convince Ideal Maki to overlook her original self's unconscious actions and join them in fixing the problem. After rescuing the true Maki's self from the Sea of Souls, where all human life begins, the group must then confront Pandora, an aspect of Maki that wants to use the DEVA System to destroy everything. When Pandora is defeated, all the pieces of Maki merge back into one, reversing the effects on the town and restoring her to full health. Philemon meets with the group and congratulates them on their success.

The Snow Queen Quest, which takes place in the real town of Mikage-cho, is unlocked by investigating an urban legend within the school surrounding a theatrical mask used in performances of "The Snow Queen": nearly everyone who wears the mask to play the title role has died. After finding the mask, the protagonist encounters Saeko Takami, who puts on the mask and is possessed by a spirit within it. Freezing the entire town, the possessed Saeko generates three towers, with the spirits of those previously killed by the mask as their guardians, while setting up her Ice Castle within the high school.

Along with Yukino, Ayase, Eriko, and Hidehiko, the protagonist heads out to save Saeko. Philemon contacts them and tells them that the only way to save Saeko is the Demon Mirror, which can remove the source of the mask's curse. The spirit possessing Saeko turns out to be former classmate Tomomi Fujimori, who was horribly disfigured by the mask when she wore it in place of Saeko. Using the mirror, the group are able to free Saeko and bring Tomomi peace. It is then revealed that Tomomi herself was controlled by the Night Queen Asura, a powerful entity who wants to cloak the world in darkness. Upon defeating the Night Queen, the town is freed from her power.

Below is a list of player characters, with their English names included.

Revelations: Persona was heavily changed when it was localized for a North American release. All characters were renamed and several of them had their appearance altered as well. Nearly all references to Japan or Japanese culture were cut, with the unusual exception being the shoe lockers and Shinto Shrines in the game. Many of the Personas were renamed rather than translated, and the town's name was changed to "Lunarvale". Yen was changed to dollars, and the overall difficulty of the game was reduced by lowering the enemy encounter rates and increasing the experience gained. However, while experience gain was increased to an amount proportional to the decreased random battle rate, money drops were left the same, resulting in a potential shortage of cash.

In addition to these changes, the Snow Queen Quest was removed by only allowing the player to commit to the SEBEC chapter. The data is still present in the game disk and it's possible to forcibly activate the quest by making use of cheating codes, but the Quest is untranslated and the game's engine cannot render Japanese characters which show as strange symbols.

It was to become the first title of the flagship "Revelations" series.

On December 3, 2018, Revelations: Persona was released on the PlayStation Classic Mini Console bundled with 20 other PlayStation games and has a save state feature included.

The English title, Revelations, is taken from the Christian Bible's Book of Revelation of the New Testament. It is the final book and its authority and relevancy to Christianity are in common dispute. However, many modern fundamentalist Christian sects place great importance upon its portrayal of "the end of days."

While the front of the game's case claimed it to be the first in a series, only one more Atlus USA production would bear this title: Revelations: The Demon Slayer. 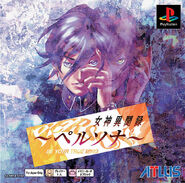 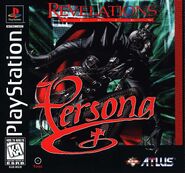