Medusa is a demon in the series.

Medusa is a famous, or perhaps infamous, character in Greek mythology. She is one of the three Gorgon sisters, of which she is the only mortal one. A single glance of her terrifying eyes is believed to turn the onlooker into stone. Even after she was decapitated by Perseus, her head is said to retain its powers of petrification. She is recognized as such a terrifying figure that her head is depicted on temples and buildings to protect them from evil spirits and thieves.

Before she was a terrifying creature, however, Medusa was originally a mortal priestess of Athena. Athena's rival and uncle, Poseidon, locked eyes on the priestess and was filled with lust. Medusa ran into Athena's temple for protection, but to no avail. The sea god raped Medusa in front of Athena's statue; Athena was angered at the act. Knowing she was powerless to punish Poseidon, Athena turned the already heartbroken Medusa into a Gorgon, either out of spite or as a means to protect herself.

Medusa would ultimately meet her demise when Perseus decapitated her. From her blood, rose the winged horse, Pegasus .

She is the boss of the floating city of Bien. Her shadow appears as a demon of the Foul race that attacks Nakajima as he advances through Bien. If Nakajima has obtained Tabasa's Statue, it will seal her Petrification attack, and will shatter after the battle. According to one NPC in the Valhalla Corridor, Medusa had Minotaur make her the Taurus Key so she could close off Bien.

"A monster of Greek lore; one of the three Gorgon sisters. She had snakes for hair, bronze scales for skin, golden wings on her back, sharp fangs, and eyes that could turn anyone who looked straight into them into stone. In some traditions, she was a beautiful woman, and her snake hair was her only ugly feature. With the help of the goddess Athena, Perseus was able to behead her."
—Shin Megami Tensei IV profile

Medusa is found in the deepest depths of the part of Naraku that lies within the Unclean Ones country on the 1st observation platform. The platform is filled with statues of her victims who she has turned to stone. Finding the prentice Samurai the most fascinating human specimens yet, she desires to add them to her collection and wants them to strike a pose while filled with fear. She begins to calling them Tayama's dogs carrying out orders as moles, leaving the prentices to believe she's losing her mind. She cries out for her body and its beauty as she crumbles and dies at the end of the battle.

During the battle, the Ahazuya Gray body armor will mitigate any Electricity damage taken by Flynn, and the Silver Necklace accessory will prevent Flynn from being afflicted by the Bind status. The demons Suparna and Zhu Tun She can be used in the fight to cut down Medusa's turn, as Suparna nullifies Electricity and Zhu Tun She nullifies any incoming Gun attacks. Fusing these two so that they inherit a Force skill will allow the party more press turns. Medusa will pose questions to Flynn during the battle and the answers will have various effects on the battle.

After being defeated, Medusa is unlocked for fusion in the Cathedral of Shadows. Medusa is fused through a special fusion of Pele, Basilisk and Vouivre. She can teach Flynn the Stun Needles, Mazionga and Tathlum Shot skills through her Demon Whisper.

"A demon of the Divine Powers.
Medusa controlled the Sky Tower, petrifying and collecting those who tried to get past the Ceiling, until she was defeated by Flynn as he entered Tokyo. She was resurrected by the Divine Powers only to be defeated by Nanashi, who was there to complete a quest.

The Sky Tower's current appearance is due to Medusa creating a multitude of domains in the Tower in an effort to strengthen it."

After being defeated by Flynn, Medusa is brought back to life by the Divine Powers to join their cause. She returns to her old residence in the Sky Tower, ambushing the party as they salvage parts for a radar to track Shesha.

The fight draws many parallels to the previous one in SMT IV. The old boss music is reused, and even the mid-battle dialogue is largely the same.

Giving her the side glance as she attempts to bargain for mercy will cause her to become enraged as she had been humiliated twice in the same fashion, dropping her defense; choosing instead to ignore and attack her causes her to cuss at the player, even uttering a censored swear, before her own attack increases by one tier.

While Medusa this time is of higher level to match the player's progress in-game, she is a fair bit easier than last time as the player would have access to a greater variety of demons that may be able to counter her.

Medusa can be fused through a special fusion of Pele, Basilisk and Vouivre. She can teach Nanashi the Marin Karin, Mazionga, Grand Tack and Ziodyne skills through her Demon Whisper, but cannot pass on her Snake's Fangs skill by any means. Medusa benefits from learning Gun, Physical and ailment skills.

Medusa is the boss of Scenario 24. 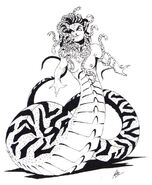 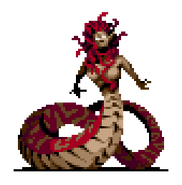