Medea is a demon in the series.

Medea of Colchis was the daughter of King Aeëtes. When Jason and the Argonauts arrived to retrieve the Golden Fleece, Medea fell in love with him. She betrayed her father to help Jason, and thereafter ran away with him, bearing him two children.

When they arrived in Corinth, King Creon offered Jason the hand of his daughter Glauce, but only if he leave Medea and her children. Jason abandoned her, and Medea planned revenge by sending Glauce a coronet and a dress drenched in poison. The poison burned her flesh as well as the King who tried to save her. Medea killed her and Jason's children as further revenge for his betrayal. She then left on a chariot sent by her ancestor, the sun-god Helios. The Medea portrays her plight in betrayal and reticence in deciding to take the lives of her children, showing her exclaiming, "Oh, I am an unhappy woman!" as well as hardening her heart against the children she loves.

Medea also had the ability, through spells and potions, to restore the youth of a person, as she does to Jason's elderly father. After fleeing from Corinth, Medea was asked to restore the king of another city. Planning to instead place one of her children in power, Medea staged a show of her revitalization spell. In this case, she made it appear that the spell needed the subject to be diced to pieces in order for the magic to work. She does this to an old ram, and throws the pieces into a cauldron. After a moment a different ram emerges, one secreted away before the beginning of the display, making it seem as though the spell is successful.

Medea is Chidori Yoshino's Persona, manifested forcefully through an experiment by the Kirijo Group. As a result, this Persona would attempt to kill Chidori if she did not take suppressant drugs, as portrayed during the SEES interrogation to her at the Kirijo-run hospital. However, Chidori ignores this, and in fact regards Medea as her only friend. Medea is a Persona of the Hanged Man Arcana. The Hanged Man symbolizes self-sacrifice, which fits how Chidori's life ended, as she sacrificed herself to revive Junpei.

It is able to disrupt the analytical abilities of Fuuka Yamagishi's own Persona. Medea is also used to interrupt Fuuka's telepathic powers and communicate to SEES through her. On the other hand, Medea is able to heal other lifeforms, and possibly revive them. Chidori gains the ability to heal her own wounds, which is dubbed the "Spring of Life". 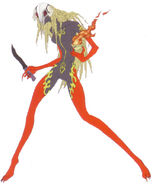 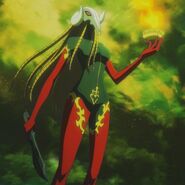 Medea in Persona 3 The Movie