Japanese history teacher
Maya Okamura is a non-playable character in the Persona 2 duology.

Lisa Silverman's homeroom teacher, who is known as "Ms. Ideal". She used to work alongside Jun's father, Mr. Kashihara. Ms. Okamura harbored unrequited love for him, and resented his wife, Junko. She was a collaborator on Kashihara's unreleased book, In Lak'ech, which prophesied the signs leading up to the end of days; among these portents was the return of the Fuhrer and his "Last Battalion". Kashihara later met a suspicious death when he fell in the Seven Sisters clock tower and was crushed by the gears.

She first appears in Seven Sisters High School, observing the Narurato Stone, and warns Tatsuya Suou to not get too close to it, as the effects of it on people aren't known. She also notes the "usual odd magnetism" in it, and hopes that it stays that way for the rest of the month.

After the publication of In Lak'ech and the appearance of the Last Battalion in Sumaru, Ms. Okamura stations herself at the Kuzunoha Detective Agency, where she assists in shedding light on Mr. Kashihara's research on the Last Battalion. As more portents of the book start becoming true, Okamura loses her mind and decides to expedite the apocalypse; she allows herself to be kidnapped by Prince Taurus and is taken deep into Xibalba, where her delusions cause a hibernation chamber for the Mayan aliens to materialize on the ship. After the aliens are defeated by Tatsuya's party, who leave Okamura behind, she is approached by Nyarlathotep. At the conclusion of the game, Okamura materializes and impales Maya Amano with the Spear of Destiny. Philemon intervenes by rewinding time and negating Maya's death, thus creating the Eternal Punishment's timeline.

"World history teacher of class 2-C who also has the first name, "Maya". I sense that I've met her somewhere...?"
—Her introduction, Persona 2: Eternal Punishment

Ms. Okamura appears during the main story only once: she is standing in the school courtyard during the game's introduction, saying that although the rock (the Narurato Stone) she is looking at looks suspicious, nothing happens when it's searched. If Maya speaks with her, she will sense that they have met before. She also makes an eerie appearance outside the door leading to the school's clock tower in the EX Dungeon. She demands the whopping amount of half a million yen in exchange for ripping open the plate leading to the tower, making it a virtual necessity to retrieve five valuable coins that can be sold at a hundred thousand yen each. 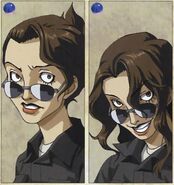 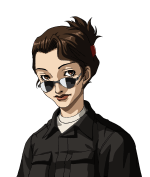 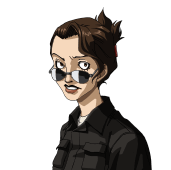