Maya Amano is a playable character in Persona 2: Innocent Sin and the protagonist in Persona 2: Eternal Punishment where she is investigating the New World Order.

Maya is the first female protagonist of the Persona series as well as the oldest.

Maya is a young woman in her early twenties with light skin, shoulder-length black hair styled in a flip, and purple eyes. At 5'6" (168 cm), she could be considered tall (especially in Japan where Persona 2 is set), although she is shorter than fellow party member Yukino Mayuzumi.

Her outfit is unique and appears to be custom-made: she wears a two-piece ensemble consisting of a two-tone brown jacket with distinctive pink hearts on the chest and a matching skirt trimmed in metallic silver paired with knee-high brown boots, finished off with a long navy necktie.

As a young teenager, her hair was bobbed with bangs, and she alternately wore a red, white and blue sailor-style school uniform, and a pink shirt under blue overalls with a red heart design.

She is famous for her rather unwavering and relentless optimism, something which begins to break down in Eternal Punishment. Maya Amano is a cheerful and compassionate woman, and works as a reporter for the teen magazine Coolest. Maya is also known for her motto, "Let's think positive!"

Maya often takes the role of a leader in the group, even in Persona 2: Innocent Sin where she is not the protagonist. Her unstoppable optimism and kindheartedness inspired and encouraged the group throughout the events of the game, making her an unforgettable force within the world they inhabited. Maya also often cheers the party up with her stuffed rabbit doll, which she calls "Mr. Bunbun." This doll evokes memories of her father.

Maya functions as the silent protagonist in Persona 2: Eternal Punishment but still retains components of her Innocent Sin personality.

"A beautiful and cheerful journalist. She's gathering rumors from students to compile into a special report."
—Her introduction, Persona 2: Innocent Sin

Maya Amano is a writer for Kismet Publishing working on the teen magazine Coolest. Her father is Masataka Amano. In the events of hearing rumors regarding a wish-granting genie called Joker, who grants anyone any wish, Maya became intrigued and tried to investigate behind the rumors, along with her partner Yukino Mayuzumi. Her investigation ends up in the Seven Sisters High School, in which she meets Tatsuya Suou and the others, setting the events of Innocent Sin.

Although Tatsuya and his friends forced themselves to forget, Maya had known them 10 years ago, as childhood friends. They formed a group called the Masked Circle, in which they hid their identities from one another with masks. She taught them the game "Master Persona," which would allow all of them to manifest a Persona and would also save Maya's life.

However, one day Maya revealed that she would have to move away. To prevent this, she was locked inside the shrine at which they played, which the kids believed would force her to stay, if she wasn't available at the time her parents moved. Although Tatsuya wanted no part, Lisa Silverman and Eikichi Mishina did it anyway and locked him along with Maya.

During the night, the shrine was set on fire by Tatsuya Sudou. Maya was not killed thanks to her Persona awakening, but she was severely injured and developed a phobia of fire.

Jun Kurosu, one of Maya's closest friends, was led by Nyarlathotep to believe that Maya had died in the fire; furthermore, the Crawling Chaos tricked Jun into believing that the fire, far from the horrific coincidence it actually was, had been the intention all along. As a result, he developed a lingering grudge against the others, and it led to him taking the role of Joker.

While revisiting the Alaya Shrine, the party fights Shadow Maya.

After the party's final confrontation with Nyarlathotep, Ms. Ideal stabs Maya with the Spear of Destiny. Due to a rumor that wounds inflicted from it could not be healed, it inflicts a mortal wound. Even in her dying breath, Maya tells the party to be positive, telling them "Mr. Bunbun" will not be happy if they are sad, and finally dies, fulfilling the Oracle of Maia and destroying the world, with the exception of Sumaru City.

Stricken with grief and devastated over her death, the party demands Philemon to do something about it. Philemon agrees to bring her back, but in an 'alternate world' with a hefty price; everyone must forget Maya and the friendship they shared. Everyone willingly discards their memory, but during the process Tatsuya out and out refuses to forget through sheer force of will. In the events of doing so, Tatsuya ends up in the 'alternate' universe with all his memories intact, causing a paradox and setting the events of Eternal Punishment.

At the end of Innocent Sin, Maya and Tatsuya end up bumping into each other in front of a station, along with the other party members who witness this. This meeting causes Tatsuya to remember the events of Innocent Sin and Maya to develop a bruise.

Maya functions as the silent protagonist in Eternal Punishment. She still writes for Coolest, often working alongside Yukino Mayuzumi. Before the events of the game, she had bumped into a mysterious student who had felt familiar to her. After this meeting, she also developed a mysterious bruise on her chest which occasionally aches. While working on a story about JOKER, she stumbles upon JOKER himself. He forces Maya, Katsuya Suou, and Ulala Serizawa to summon their Personas, and they wind up pursuing him.

Maya appears in Persona 3 as the online screen name for the Hermit Social Link character, in the English version of the game. She even says "let's think positive!"

Maya is an A-Rank BattleNet opponent that's said to be a reporter that prefers to use recovery spells and bird demons. Defeating her 25 times earns a War Crow, 30 times a Garuda.

The motif of Maya's theme is probably the most arranged officially in the human character's theme category of the Megami Tensei series. If one does not count the remastered tracks of PSP remakes of the Persona 2 duology, there are 4 tracks containing Maya's motif in Innocent Sin OST, 1 track in Eternal Punishment OST, 1 vocal remix from "Persona 2: Innocent Sin ~ The Errors of Their Youth," 1 rearranged track from Persona 3 FES, 2 rearranged track in the Eternal Punishment PSP remake and Persona 20th Anniversary All Time Best Album for Persona 5 deluxe version pack-in bonus soundtracks which were released exclusively to Japanese version.

"Change Your Way" is the ending theme song for Persona 2: Eternal Punishment written and sung by Elisha La'Verne with the game in mind. According to the songwriter the song is about always being available to get out of bad situations, and was based upon experiences as she grew up in London, witnessing homeless people on the streets. This echoes the protagonist Maya's motto, "Let's think positive!"[1]

Artwork of Tatsuya and Maya, along with their Ultimate Personas 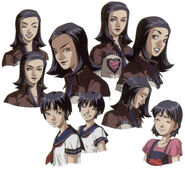 Most of Maya's expressions, her childhood self, and her Shadow Side

Maya and Jun in the Light Novel

Maya sad as a kid

Maya crying as a kid

Maya tearfully smiling as a kid

Maya sad as a teenager

Maya happy as a teenager

Maya scared as a teenager 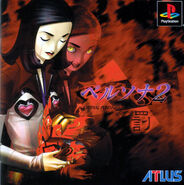 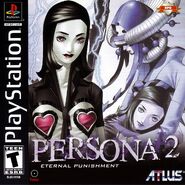 USA PSX Boxart of Maya being held by her Persona Maia.

Maya and her Persona Artemis

PSP boxart of Maya and her Persona Maia 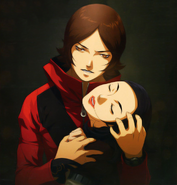 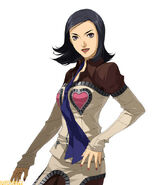 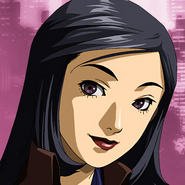 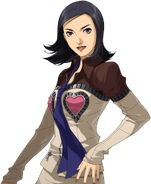 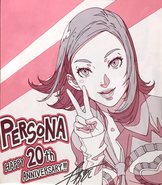 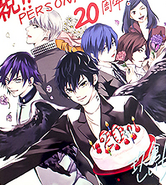 Maya in the anime trailer

Maya and Yukino in the anime trailer 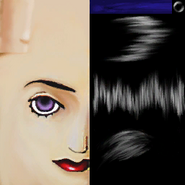 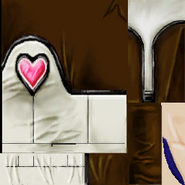