Maya is a demon appearing in the series.

In the Hindu religion, Maya is a principality goddess centered around the concept of "illusion" and has multiple meanings. In fact, Maya's very name is "illusion" in Sanskrit. She manifests, perpetuates and governs all forms of illusion as well as the dream of duality in the universe and the mystic arts. By extension, it later came to mean the powerful force that creates the cosmic illusion that the phenomenal world is real.

She brings to mankind the ignorance and enlightenment of the individualism, the concept of ownership and the awareness of otherworldly phenomena. For the Nondualists, maya is thus that cosmic force that presents the infinite Brahman (the supreme being) as the finite phenomenal world. Maya is reflected on the individual level by human ignorance (Ajnana) of the real nature of the self, which is mistaken for the empirical ego but which is in reality identical with Brahman.

It is believed by some schools of thought that the Burmese mother goddess Maya also holds some connection to the Hindu goddess of illusion. She has also been known as an epithet for goddess, and the name of a manifestation of Lakshmi, the goddess of "wealth, prosperity and love." She was also known as Mother Maya, Mother of Illusions and Maya of the Night.

This version of Maya should not be confused with the Mayan demon of the same name.

"The Hindu personification of Illusion. It is said to have the power to make humans aware and become enlightened about "phenomena" caused by things on earth. A Maya of Burmese lore was a mother goddess and may have some relation to the goddess of illusion."
—Shin Megami Tensei: Strange Journey compendium

Maya serves as the Sector Boss of Sector Grus. It was her power that twisted Grus' landscape to its warped form; she also threatens Zelenin and the protagonist with her vicious illusions until the protagonist encounters Commander Gore and makes him awaken to the true power of the Ubergestalt. As a result, the two muster enough strength to cast them away.

Upon breach of her sanctum, a twisted blend of the first four sectors, she appears, sarcastically asking whether the protagonist's repeated defeat of the Mothers was some form of entertainment, and if the protagonist had enjoyed the act of "matricide" so much she was next in line.

Upon defeat, she claims that she is too a child of Mem Aleph and then drops her Exotic Matter. Maya can then be produced from a special fusion of Hariti, Succubus, Incubus and Airavata.

The battle against her can be dangerous for a party specialized in spellcasting, as her own special skills allow her to negate any form of offensive magic and instantly kill the offender. As befits the goddess of illusions, she can also cast Illusion Ritual, buffing her evasion stats. She is weak to Gun damage, but repeated castings of Illusion Ritual will allow her to dodge most attacks.

Other than that, she knows strong elemental magic (-dyne spells, Gate spells) and Ultraviolence, an exceedingly strong Physical attack that will hit the entire party, and Evil Vortex, a damaging attack that can inflict Stone status. Dekunda is also in her repertoire.

Maya can be rarely found in the Cosmic Egg, on Fifth. She can teach Nanashi the Megidolaon, Makarakarn and Sexy Dance skills through her Demon Whisper. She benefits from learning ailment, Almighty and support skills. 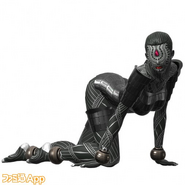