Matador is a demon in the series.

Matador, lit. "Bullfighter" in European Spanish and Portuguese, is derived from the late Latin word mactator, which means to subdue or kill. It is also the name of the toreros (sometimes called "toreadors" in English-speaking territories due to the influence of Carmen) that perform in the bullfighting events famous in Spain. Matador is one of the toreros, and the word literally means "killer," as it's the matador's job to kill the bull.

Prior to the modern day evolution of bullfighting, however, the matador wasn't the star of the performance, but the picador. Their decline in popularity was due to matadors adding more flair into their trades, as well as the general gain of importance of commoners, as early picadors were usually nobles.

"A Spanish Grim Reaper born from the pursuit of aesthetics killing. With his terrifying sword Espada, he now preys on humans rather than bulls."
—Shin Megami Tensei III: Nocturne compendium

Matador appears as a boss in the updated release of Shin Megami Tensei III: Nocturne, titled Shin Megami Tensei III: Nocturne Maniax. He is first mentioned by a Manikin in the Great Underpass of Ginza, where he is known as a "Grim Reaper." The Demi-fiend must defeat him in order to reach Ikebukuro, headquarters of the Mantra. Upon approaching the demonic presence, the Demi-fiend was forcefully summoned into another realm by Matador, where Matador claims that a weak being like him doesn't deserve to hold the Candelabrum of Sovereignty, but knowing that he will not give in without a fight, Matador engages the Demi-fiend in a battle.

He appears as a skeleton dressed in a bullfighter's costume, and speaks of fighting for an audience with style and flair, even though their present environment (a desolate wasteland dimension, used by all fiends) is lacking the aforementioned. After defeating Matador, the Demi-fiend gains the ability to fuse him by fusing any two demons whose fusion will result in a Yoma race demon, during a 1/8, 2/8, 3/8 or Half Kagutsuchi phase. Such a fusion requires a Deathstone, an item found only in the Labyrinth of Amala.

When fought, Matador will engage in constant usage of Red Capote to increase his agility and evasion to max. This is further compounded with his abuse of Taunt to make the Demi-fiend's team susceptible to his multi-hit attacks. Casting any debuff spell but Sukunda will cause him to use Dekunda and casting Sukunda to decrease his agility to below +1 will result in him recasting Red Capote to undo the debuff spell.

Matador appears as a boss on the twenty-seventh floor of the solo instance Denshi Kairo, branching pathways depending on whether players kill him or the Nandi that spawn alongside him first. Matador is also an optional boss in the Suginami Tunnels (Bronze) dungeon if you use an Ultimate Summon Orb, replacing Great Beast Garm.

To acquire Matador the player must fuse him by acquiring his plugin from exchanging five hundred Essences of Yetzirah that are obtained by clearing Hack Chip α dungeons. He cannot be contracted.

"A master sportsman who entertains the audience in exchange for his own life: one mistake can mean his death. Some believe that matadors who die while performing remain in this world."
—Shin Megami Tensei: Strange Journey compendium

Matador appears as the resident Fiend of Sector Carina, and must be defeated in combat to unlock his fusion. After his defeat, he will drop the Red Capote Forma, only obtainable by beating him.

Matador has a 1/256 chance of appearing in the Toyosu Shelter, at the small vent near the center of the shelter. (see below) His Almighty-spam mode is set by Phys resistance. Upon defeat, he drops the Capote Earring, arguably one of the best accessories in the game.

Matador, along with all the other Fiends, is encountered in Twisted Tokyo. Matador is encountered on B5F and drops the Aiki Staff second cycle onwards, and is fought at level 922 on cycle 9.

Matador's attacks are all physical, and are augmented by Phys Pierce that allows them to bypass all resistances and even Tetrakarn. Considering the high number of hits his signature move Andalusia can do, there is a very high chance Matador can get a crit, smirk and gain extra turns, which can then produce a problem if he depletes a party member's MP with Soul Drain or dishes out even more damage with his other party-hitting attacks. Without resistance to reduce the incoming damage, buffs and debuffs become the only reliable way to endure Matador's attacks and deplete his Press Turns. Bear in mind that even if he gets a few crits off with Andalusia, if any one of those hits misses, he loses turns and does not even get to smirk. Be mindful of excessive buffing and debuffing since it may cause him to use Dekaja and Dekunda to purge it all.

Matador, along with the other Fiends that held Menorahs and the Demi-fiend, are set to appear as part of the Return of the True Demon DLC pack. As before, defeating Matador unlocks the ability to fuse him.

"A master sportsman who entertains the audience in exchange for his own life: one mistake can mean his death. Some believe that matadors who die while performing remain in this world."
—Persona 4 compendium

Matador is used in the hexagon spread fusion in the Velvet Room to create the Persona Trumpeter. He can be acquired through Shuffle Time in the middle floors of Marukyu Striptease.

Margaret wishes to see a Matador that has inherited the skill Mahama as the second request in her Social Link. This will grant a new rank in the Empress Arcana and can be done through several fusion options. Firstly, the protagonist may opt to merge a level 19 Anzu with a Berith or a Yaksini in a simple fusion. Second, they may opt to perform a triangle fusion that will meld either a Power or a Principality (Principality must be at least level 21 to be viable, however) with an Oberon and a Saki Mitama. Finally, they may opt to perform a triangle fusion with a Power, an Andras and an Omoikane.

"A master sportsman who entertains the audience in exchange for his own life: one mistake can mean death. Some believe that matadors who die while performing remain in this world."
—Persona 5 background

Matador is the third Persona of the Death Arcana and can only be obtained through fusion in the Velvet Room. Matador is the first Persona to learn the Null Dizzy, Swift Strike and Trigger Happy skills. When itemized through an Electric Chair execution, Matador yields a Garula skill card.

Caroline and Justine want a Matador that has inherited the skill Magaru as the third request in their Confidant. This grants a new rank in the Strength Arcana and can be done through several fusion options.

One of the earliest ways to get this Persona is by fusing a Mokoi and a Regent, both available in the Madarame Palace, the latter encountered as a tutorial. The other method is to fuse Obariyon with Nekomata, the latter having Magaru as a base skill (which also gives Matador a Gun skill from Obariyon in the form of Snap to complement his Trigger Happy skill). Now that Matador has inherited Magaru and the Confidant has ranked up, the protagonist can use the Lockdown mechanic in the Velvet Room.

"You hold a candelabrum... Then, like me, you must be seeking supreme power. That I cannot allow. Only the greatest warrior is worthy of such power. It is meant for a master swordsman... One who, amidst blood and applause, has put an end to countless lives... That warrior is I, Matador. It's unfortunate that we have no spectators, but I believe this will be an excellent show regardless, as you and I contend for the candelabra. I'm sorry to say, but it seems you are rather weak to be in possession of a candelabrum. You should give it to someone more deserving, like myself... But, since it's unlikely you'll heed my advice... I challenge you to a duel!"
—Matador, challenging the Demi-fiend 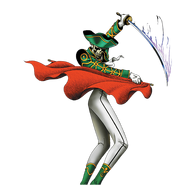