Doug Erholtz (SMT IV)
"I came to this land after learning of the catastrophe underway in the world of man..."
—Mastema, Shin Megami Tensei: Strange Journey

Mastema, known as Mansemat in Japan, is a demon in the series.

Mastema, also known as Mansemat, is an angel of persecution and hostility who carries out persecutions and punishments for God as cited from the literature of Israel's Second Temple Period. In this regard, he is also similar to Satan, who held more or less the same portfolio in other books of the period. Mastema is said to be the angel that unleashed the ten plagues of Egypt and attempted to kill Moses.

He tempts humans and tests their faith. He asked God to permit him to have demons as his subordinates. In the Zadokite Fragments and the Dead Sea Scrolls, he is the angel of disaster, the father of all evil, and a flatterer of God.

"The angel who persecutes evil in Hebrew folklore. He carries out punishments for God.
He tempts humans and tests their faith. He asked God to permit him to have demons as his subordinates. In the Zadokite Fragments and the Dead Sea Scrolls, he is the angel of disaster, the father of all evil, and a flatterer of God."
—Shin Megami Tensei: Strange Journey compendium

Mastema appears as an angelic figure but with dark skin, black hair and blackened wings. True to his title as "the angel of hostility", he is incredibly manipulative and untrustworthy, pleading no loyalty to even The Three Wise Men who hired him and is a self-serving manipulator.

He first appears in Sector Bootes after Norris was put down and the protagonist and Zelenin were planning an escape route, initially disguised as a crewmen in a Demonica suit. He quickly takes of his guises, and explains to the two that he is an angel from the "Kindgom of Light" and has been sent by God to visit the Schwarzwelt, but his reasons are vague at best. He often appears in times of great danger and guides the crew of the Red Sprite to the truth, but often gives an impression of being untrustworthy, and at least once he spoke against free will, preferring absolute submission to the Law.

He relates well to Zelenin and holds great respect for the protagonist, although Jimenez views him as a nuisance. He helps Zelenin and the protagonist escape from Mitra's Tower in Sector Bootes, aids the Red Sprite's crew against Horkos in Sector Carina, and acts as a translator during the events of Sector Delphinus, stating the contents of several urns in Mitra's Tower as read in demon script. Following this, he is left unseen until Sector Grus, where Zelenin learns he's nearby and consults him, later returning to embrace the "gift" of being transformed into an Angel (Judge Zelenin) to end the Jack's Squad crisis without any blood being spilled. What happens later with him and what his intentions are is left up to the game's final choices upon reaching Sector Horologium.

In the Law alignment, he seems to vanish after turning Zelenin into an angel in Sector Grus, only appearing in the Vanishing Point in Sector Eridanus once Mem Aleph has been destroyed, praising the efforts of the protagonist and Zelenin in creating the World of Law.

In the Neutral alignment, he appears again to express his terror and moroseness after the protagonist defeats Zelenin. He chooses not to engage the protagonist, merely reminding them in a bitter fashion that whatever happens will be of their own choice only. He hopes the forces of Law have better hopes of triumphing with the next time the Schwarzwelt rises, feeling the eternal recurrence of the Schwarzwelt makes their triumph inevitable.

In the Chaos alignment, when his plans to raise the Kingdom of Light upon Earth with the Schwarzwelt are utterly ruined, he breaks down and attacks the protagonist as a boss in Sector Horologium, infuriated by the loss of the possibility of ascending to a superior form. As a boss, Mastema features several unique entire-party hitting attacks such as Great Lament, which charms all non-Chaos demons, Judgement, an Expel element instant death attack with a high activation chance, Untainted Wind, a decently powerful wind element attack, and Mel Faize, a powerful Almighty element spell. His physical attack also hits the entire party. After his defeat, he can be fused by a special fusion of Abaddon, Throne, and Cherub.

In the New Law Route, Mastema is encountered by the protagonist and Zelenin in the Empyrean Ascent where he is frantic and distressed about The Three Wise Men regaining their full power. He parts ways with the two when they express their desire to fight the leaders, viewing the situation as pointless and not wanting to fight against his former masters.

"This is a rather shady character... I'd want to inspect the halo before I took him at his word."
—Walter, Shin Megami Tensei IV

Mastema is noticeably less hostile compared to his Strange Journey counterpart. He is in charge of Midtown and is working with the Ashura-kai. The demons in the building speak of him and how some of them don't like Tokyo being run by a black-winged guy like him. On the 54th floor, he appears before the Samurai, provoking a battle against them. He speaks of gloriously slaughtering them like he did the Unclean Ones in the ancient days and cooking them, only to reveal he was joking and that he is one of their fellows. He introduces himself and declines Jonathan's offer to join them, as his job is to watch Midtown and prevent the Ring of Gaea and thieves from entering.

He tells them that without the Red Pills, all order would be lost in Tokyo. When questioned by Walter about what he would do if they were members of the Ring, he simply laughs it off, stating that he has no intention of being struck down like Tenkai was. He warns him that Tayama would learn about them if they fought. He lets down the barrier that blocks their way and asks them not to tell Tayama, his last words being that he is carrying out the Lord's will in his own way before the scene ends.

If Flynn goes back in, Mastema will say that siding with Tayama, who is trying to bring order to Tokyo, is what he has decided is the Lord's will, but then realizes he has said more than he should and speaks no more. Mastema appears as an optional boss on the Law route in the Challenge Quest Great Raven of the Underground, as the Archangels send Flynn to get revenge for their imprisonment. The quest to slay him comes after Azazel is defeated. He is surprised that his comrade would be the one to try to slay him, but he will not let him go this time since he is attempting to interfere in his plan. As he is dying, Mastema curses Flynn for being a puppet who is only controlled by others, along with Gabriel for her role. He asks the Almighty Lord why he is dying as he is the one who is most faithfully following His will, crumbling afterwards. Afterwards, he's unlocked as a summonable demon by a special fusion of Asmodeus, Gemori, Murmur and Kazfiel.

On the Neutral Route, Mastema will admit that choosing a path of neither angels or demons is an admirable choice, but it means the suffering of the sons of man will continue. Noting that the best route may not be the one for all, he tells Flynn it is not a sin to be troubled, as doubts are an opportunity for belief in the Lord to sprout. During the Chaos route, Mastema can tell Flynn that he does not condemn his choice, and that straying from his path is a way to learn about the Lord as well.

In the "Clipped Wings" DLC series, Mastema, under the guise of M, summons Flynn to the Eastern Kingdom of Mikado's early days. Aquila, the first King, requested his help in slaying the four archangels, Uriel, Raphael, Gabriel and Michael. Mastema justified his actions by stating that the four had gone against God's will and intended to wipe out the humans not chosen by him. With Flynn's help, the four archangels are defeated, though Mastema spares Gabriel, believing that she cannot do anything to help her allies, and locks the other three in the Kagome Tower. With his promise to Aquila fulfilled, Mastema tells Flynn that he intends to rebuild Tokyo into one where humans follow God's will in their own way. Completing this DLC will also reward Flynn the demon Aeshma, a demon of the Tyrant Race (due to being a palette swap of Asmodeus), and also, according to Mastema, one of the two demons wielded by the late Aquila, the other being the Minotaur.

Mastema appears as one of the demons in Tokyo. Unlike the others he possesses the Demon Summoning Program, and is looking for people who would receive the program and protect the city from the demon invasion. To do so, he endangers his own life by fighting them. He first meet the protagonist at midtown park, and after being defeated he gives the program.

"An angel who serves by persecuting evil in Jewish folklore. As the commander of demons, he is permitted to test the faith and hearts of humans. Although in the fragments of Zadok and Dead Sea Scrolls, Mastema is mentioned as "the father of all evil" "the bringer of misfortune" or "the one who flatters God"."
—Shin Megami Tensei: Liberation Dx2 Demonic Compendium

Mastema as he appears in Shin Megami Tensei: Strange Journey 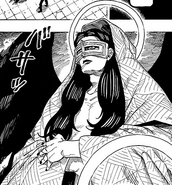 Mastema as he appears in Shin Megami Tensei: Liberation Dx2.