Kim Rhodes
"You shut your impudent mouths! I've done nothing wrong! I will wring out every last ounce of corruption from my staff by working them into the ground! I'll silence all charlatans who betray me! And I will consume every last vote in the city, whether these people agree with me or not! Only then can I build a safe haven-a radiant snow city that sparkles like winter!"
—Shadow Mariko, Persona 5 Strikers

Mariko Hyodo is a character from Persona 5 Strikers. She is a politician and the mayor of Sapporo.

Mariko has brown bouffant hair and hard angled eyebrows. She wears red lipstick, eyeliner, blue to pink eyeshadow and a pair of earrings. She wears a light royal blue scarf tied around her neck and a black business suit with darker colored rose motifs around her shoulders and left side of her skirt.

As the Monarch of the Sapporo Jail, she appears grotesquely obese unlike her real self. Her entire color palette is cold pale, her skin included, aside from her makeup and her Shadow eyes. She has a pair of fangs on her upper teeth. She wears a large amount of jewelry around her neck in place of her scarf, has piercing around her left side of her face, and wears a tiara. This tiara acts as her crown, if it's taken off, all desires trapped within are freed.

During the boss battle, she takes on a giant size, with a large mouth and eyes appearing on her stomach and her lower body appearing bloblike. Her arms become several tentacles holding utensils and her head is seen tilted back past her body's apex.

Hyodo is a politician with the intent of maintaining a clean public image of her city, and genuinely cares for her people's well being. As she was a trade partner of Kunikazu Okumura, she came to know Haru Okumura quite closely when she was a child and is genuinely disheartened by Okumura's death. Even when being affected by the EMMA application, she still manages to calm down when Haru convinces her to stop berating her civil wards.

While Hyodo genuinely cares about the city and its people, she has become embittered by the time the game begins, after having been framed by a scandal that involved the accidental death a nine-year-old girl. In retaliation for the damage done to her name, she begins using EMMA to steal the desires of the people of Sapporo to allow her to maintain her position.

When being affected by EMMA, she becomes much colder against any civil wards in order to make sure that there are no more scandals that occur within the city. She became a highly abusive micromanager towards city workers, regularly working them to exhaustion over petty issues and regularly insulting those she regards as failing in even minor ways. She also tends to start outrageous cleaning campaigns where not even a speck of dust can remain in the city. Ironically, this makes her ignorant to the fact that using EMMA's salvation to artificially inflate her power and rig the ballot boxes is a scandal as well.

Mariko is a charismatic politician from Sapporo and the city's mayor. An incident last February caused Hyodo much disdain and resentment against her fellow politicians. During the Sapporo Ice Festival, an ice statue collapsed, killing a nine-year-old girl in the process. A senator took advantage of the scandal in an attempt to tarnish Mariko's reputation so he can become mayor himself. In reality, a sponsor used faulty materials for the sculpture. When Mariko threatened to call the police, he threatened that the police would discredit her instead and the other man would become mayor. Hyodo backs down out of fear of being discredited due to her involvement in the incident.

When she came across the EMMA application, she used her Jail to convert masses of people into her supporters as well, she vowed to get stay on as mayor to prevent further corruption. Hyodo's keyword is public and announced aloud during election campaigns, ensuring as many people get ensnared as possible. This allowed Hyodo to obtain an 88% approval rating in two months, three politicians getting a Change of Heart and confessing to corruption, and winning the support of an opposing political party. There are also rumors of Hyodo going to the national level. As she regains her fame, she forces her civil servants to work to the bone for petty reasons to make sure that the city is clean and devoid of corruption, for the sake of getting her public image back.

She meets the Phantom Thieves of Hearts when they visit Sapporo. When she was first met, she was forcing a civil ward to watch the garden 24 hours a day to prevent them from withering. She recognizes Haru, and reveals to her that she was previously acquainted with Haru Okumura's father, Kunikazu Okumura. According to her, she is a trade partner and when she would go play golf alongside Haru and her father when Haru was still a child. Upon obtaining intel from citizens in Sapporo, it was also revealed that she was starting unrealistic and outrageous cleaning campaigns where not a speck of dust can remain in the city.

It was revealed she's the Monarch of the Sapporo Jail after an election campaign where she requests her supporters to use EMMA so they can "befriend" her. Her keyword is "Snow City." After exploring her Jail once, she then can be seen berating another civil ward because he was being forced to work despite having a flu. According to her, she's organizing a mass cleaning campaign for a month. When Haru berates Hyodo for her distorted behavior, Hyodo is successfully convinced to leave the ward alone for the time being.

When the party sends the calling card, they cover Mariko's election posters with them. Once confronted, the lower body of Shadow Mariko transforms into a large bullfrog like creature towering over most of her upper body, with a massive face consisting of a pair of eyes and a massive mouth. Once she was defeated, Haru chides Hyodo for straying from her beliefs, and urges her to stop feeling sorry for herself and stand up to face her problems. She realizes the meaning of her words and agrees to reform, stating that she was proud of her growth and her father would be too. The next day, Hyodo admits her involvement for the oversight that resulted in the snow statue accident, as well as her involvement in the conspiracy to hide the truth, thus disqualifying herself from the elections. Once the confession is over, Zenkichi Hasegawa allows the Phantom Thieves to meet Mariko in private, and she admits to making an illusion that tarnished the deceased child's legacy. As Hyodo leaves, she encounters the mother of the deceased child who tells her that even if Hyodo were to leave politics behind and disappear into obscurity as recompense, her child would still not come back, and that Hyodo should deal with the grief and keep trying to get re-elected as mayor, which she accepts.

Snow White Mariko is weak against Psy and Curse skills, resistant to Electric and Nuclear skills, and can nullify Ice skills. For team composition, it is advisable to bring Haru to the battlefield. Other members can include Morgana and Sophia. Never bring Yusuke as his Ice skills will be nullified, nor Ann as she's vulnerable to her Ice attacks. The protagonist is recommended to have Personas with Psy and Curse attacks. Also, bring a huge amount of medical supplies and healing skills as she is a deadly enemy due to her speed and attacking power; she can kill most party members within a few hits.

Mariko is extremely fast and most of her attacks can take down party members in a few hits, and like Mad Rabbit Alice, her attacks have very little telegraphing between them. During this, keep distance to not get affected. She also uses Ice skills and Physical skills to sweep her surroundings, some of which will be telegraphed by a red ring appearing on the floor, which makes up the area of the attack.

Mariko will turn red regularly, essentially inflicting herself with Rage; during half HP or below, she will always retain this state. It will put her into rage mode and she will always eat one teammate, preventing them from returning until she is stunned. Luring the enemy underneath one of the 4 chandeliers and dropping it will both free the teammate and snap her out of rage mode, in addition to giving the party a window to attack. If there are no chandeliers left, taking out her down gauge or using Showtime will result in the same outcome. She will also take Technical damage from Psy attacks during rage mode, so capitalize on it to deal big damage. At 50% HP, she might also summon a blizzard, which can slow any party member to a crawl, while Mariko remains unaffected. Due to her high moving speed, this is lethal if left unchecked. If this happens, head to the exclamation mark that appears on the map and turn on the stove. 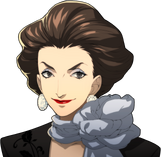 Mariko as the Monarch of Sapporo

Mariko (鞠子) means "ball, child." Her last name, Hyodo (氷堂) means "ice institute," referencing to her Jail and her merciless attitude towards her civil wards for their incompetence.