Mari is a very comprehensible, kind adult who likes to help anyone in need. She was in a relationship with Kaido's older brother until he was killed off by Kudlak, where she displayed a brief moment of deep revenge. She partially blames the angels for allowing this to happen if the player goes with King of Demons Route, showing a darker side of her persona.

Mari was Atsuro's tutor when he was in middle school. She is now an elementary school nurse. She was Tadashi Nikaido's brother's girlfriend. She is looking for the criminal that killed him.

In her desperation to find her boyfriend's killer, she forms a pact with the creature Kresnik, who is also looking for her boyfriend's killer. The killer turns out to be a vampire named Kudlak, who knows Kresnik. Mari, possessed by Kresnik, fights Kudlak along with the protagonist's party, but reveals that she must be the one to strike the final blow as she has a special powder that can kill him once and for all. Otherwise, Kudlak would simply revive stronger than ever. If the protagonist does not return Mari's bag to her, she will be killed off by Kudlak before the party fights him. Afterwards, the party laments her death with Atsuro saying he does not want to think about her anymore out of grief.

If Mari does not die and the protagonist allows Mari to finish off Kudlak, Mari will want to join the protagonist's party the next time she is spoken to. If she is told to think it over, she returns on the Last Day as a party member, regardless of which ending the protagonist has chosen (barring Yuzu's).

Mari will not join the party if the protagonist chooses to follow Yuzu's idea of escaping.

Mari will offer to join the party at the beginning of the 7th day, to assist Kaido in making the protagonist the Overlord. In this ending, she declares her loyalty to the new King of Bel.

Mari will offer to join the party at the beginning of the 7th day.

Mari remains loyal to Kaido and the protagonist, and does not show hesitation at the idea of having to kill demon tamers in order to survive. Should the protagonist elect to kill humans, she reluctantly leaves the party at Kaido's request. She can later be seen speaking to Yuzu and Midori Komaki, unsuccessfully trying to defend the Overlord's decision. Otherwise, if the protagonist decides to avoid killing the demon tamers, she remains in the party.

Mari will continue to aid the protagonist as the Messiah.

Mari's main focus is on Magic. She has a movement range of 4, with a speed of 53. Unlike all other magic-oriented characters, she possesses both good Magic and Vitality growth, making her resilient against most opposing attacks and able to utilize offensive and healing spells effectively. In doing so, however, she compensates in Agility. Mari's availability is also limited to the 7th Day (and 8th in Overclocked), although the absence of Yuzu, Midori and Keisuke on Chaos routes gives her less competition. Regardless of competition, however, she is a generally solid unit.

Mari is encountered here, possessed by Kresnik. The protagonist must help her escape from Kudlak.

Mari appears here, possessed by Kresnik, to battle Kudlak. The protagonist must ensure that Mari lands the finishing blow on Kudlak or that Kudlak does not escape. 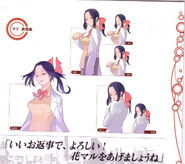 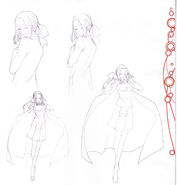