The Manticore, is a big, legendary creature of ancient Greek and Persian myths that preferred to eat humans. It has also been sighted in places as varied as the jungles of India and Indonesia and, more rarely, the forests of North America and Europe. The Manticore is said to be a bold creature, being able to take on multiple men at once, and often looking for such opportunities to fill it's appetite. The beast's name comes from the Persian word "mardkhora," or "man-slayer."

It has the body of a red lion, a human head albeit with three rows of sharp teeth (like a shark), sometimes bat-like wings, a trumpet-like voice and either a dragon or scorpion-like tail which it can shoot spines from. It may shoot venomous spines to either paralyze or kill its victims. It devours its prey whole and leaves no clothes, bones, or possessions of the prey behind.

Manticores are fierce predators that patrol a wide area in search of fresh meat. A typical manticore is about 10 feet long and weighs about 1,000 pounds. Some have more human-like heads, usually with beards. Males and females look much alike.

Manticores eat any meat, even carrion, though they prefer human flesh and rarely pass up an opportunity for such a delicacy. They are smart and social enough to bargain with or bully evil humanoids into alliances or offering tribute, and more powerful creatures may hire or bribe them to guard or patrol a place or area. They like lairs in high places, such as hilltops and caves in cliffs.

In Greco-Roman Mythology, the Manticore is one of the children of Typhon and Echidna along with many other monsters. Later, the Manticore would receive more notoriety thanks to a Greek writer, Flavius Philostratus, who recorded a conversation alluding to the existence of the mythical Manticore.

"Origin: Ethiopia. A demonic beast that spreads fear and plague. It has a red lion's body, an ugly man's face, bright blue eyes, and 3 rows of teeth. In addition to these, it also has bat wings and a scorpion tail. Though it is not very intelligent, in some cases it is capable of human speech. It is fierce and extremely agile."
—Shin Megami Tensei A-Mode DDS Dictionary

"An evil chimera of Indian descent. It lives in deserts and jungles. It had the body of a lion and the wrinkled face of a man. It loves to eat human flesh with its three rows of teeth. Its tail is fatally poisonous; in some versions this poison can be shot out."
—Shin Megami Tensei IV compendium

Manticore can be found in the initial areas of Blasted Tokyo as well as in the Camp Ichigaya region. It can teach Flynn the Toxic Sting, Damascus Claw and Posumudi skills through its Demon Whisper. Manticore will also be found in the Infernal Tokyo version of Shinjuku.

Manticore can be found in Shinjuku in the Nicho area. It can teach Nanashi the Toxic Sting, Axel Claw, Frenzied Chomp and Acid Breath skills through its Demon Whisper. Manticore benefits from learning ailment, Physical, Electricity and Gun skills. 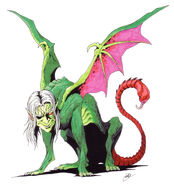 Manticore as it appears in Last Bible II

Manticore as it appears in Last Bible Special
Community content is available under CC-BY-SA unless otherwise noted.
Advertisement