Unnamed Reason of Manikins
Manikins in Shin Megami Tensei III: Nocturne are human like beings unique to the Vortex World. While similar in shape and physical and intellectual levels to humans, they are not humans themselves. Several special Manikins, however, have been blessed with great strength that allows them to survive in the harsh Vortex World.

"When the Conception took place, Tokyo was purged of humans.
It was a necessary step toward the rebirth of the world... But, even after they died, the human souls lingered.
And likewise... their emotions.
Weak emotions dissipated instantly, but strong ones remained...
Those emotions sought receptacles, and found refuge in the substance closest to life: earth.
They merged with the earth and took shape one after another.
For some, they became what they longed to be...
For others, a side of them that they abhorred surfaced.
Human emotions became Manikins and inhabited the Vortex World.
Creation is forbidden to them, and their existence will be denied once the new world has been born, but...
Some Manikins have possessed exceptional strength."
—Lady in Black

Manikins with the aforementioned strength pertain to three special individuals:

Among the ranks of the Manikins, there are also some noteworthy characters:

Manikins often experience involuntary spasms. The true cause of this is unknown and never stated anywhere, but it adds to their inhuman features. A fact of note about these spasms is that Futomimi is the only Manikin to not experience them, and that Sakahagi's are particularly violent, thrashing his upper body from side to side.

Most of the Manikins were taken in by the Mantra Army demons of Ikebukuro and subjected to slave labor. They were worked to the point of submission and imprisoned for trifling acts. Their punishment was often administered on the spot, either by death, or absorption of their Magatsuhi. Some disgruntled Manikins will even attack anyone at random within Ikebukuro, despite the fact that they have virtually no chance of winning.

Those Manikins who could no longer endure their wretched life as slaves secretly dug a tunnel at Zoshigaya Cemetery and sought refuge in the Great Underpass of Ginza, making homes within its labyrinthine corridors. Though they found peace living underground for a while, it was to be short-lived. Following the fall of the Mantra, the surviving remnant demons rounded all of them up and took them to Kabukicho Prison where they were tortured more than before and constantly drained of Magatsuhi by the Mizuchi jailer and the Naga guards.

After the Demi-fiend defeated the Mizuchi jailer and indirectly rescued them in the process (his true purpose was to find Isamu), their leader Futomimi gathered all of the Manikins to take on a treacherous exodus to Asakusa, promising them a world of peace, free from suffering and slavery. The Manikins consider Asakusa to be their ancestral domain because their original birthplace in Mifunashiro was at the very center of it.

Upon reaching their intended destination, the Manikins started to clean up, restore and rebuild several structures within Asakusa to serve as their new home village, living in hope that Futomimi will bring about a utopia for their kind by creating a Reason. Their efforts would come to naught as the Manikins would soon be hunted down by the Yosuga demons under Chiaki, and will lose hope and direction when Futomimi is killed while trying to protect Mifunashiro. The Reason of Yosuga states that only the strong have the right to exist: as weak creatures by nearly any standard, the Manikins would have no place in Chiaki's world.

When the time of creation drew nearer, a group of Manikins scaled the Tower of Kagutsuchi to see if they can still make Futomimi's visions a reality, but as they have neither a consensus of purpose nor a sponsor god, they have no real hope of establishing a valid Reason, nor of defeating the three other Reasons. 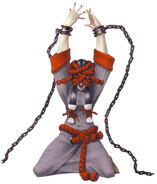 The Manikin priestess serving under Gozu-Tennoh.
Community content is available under CC-BY-SA unless otherwise noted.
Advertisement