"The 'Image', existing in an unknown dimension, is a spiritual object. The real nature of oneself. We can also call it the soul. Now is the time to face this inner space with a pure mind. The image world is supported by rich spiritual activities that could lead us to a wonderful future. But some deny us that. The decline of the European Union... The overwhelmingly deteriorating relations between China and the US... All part of this new path of chaos... But soon Maken will help us. Deus Ex Machina is coming..."
—The opening of Maken Shao

Maken X is a first-person Action Adventure game developed by Atlus and released for the Dreamcast in 1999. It is Atlus's first fully 3D title and the first game to be directed by Katsura Hashino. The story focuses on the titular Maken, an artificial demon capable of controlling humans through its Brain Jacking ability, as it travels the world after being instructed to defeat Mr. Meteor. Like many other Megami Tensei games, the game features multiple endings that are influenced by the Maken's actions throughout the game. Maken X has a greater focus on world travel and realism than other Megami Tensei games, with an emphasis on the human characters encountered during the game, although demons and Magic are still present.

A third-person remake titled Maken Shao (魔剣爻) was released for the PlayStation 2 on June 7, 2001 in Japan and was later released in Europe as Maken Shao: Demon Sword on July 23, 2003. It was rereleased on the PlayStation 3 as a downloadable game exclusively in Europe on February 27, 2013 but was delisted in 2016 for unknown reasons.

Maken X begins in the Kanazawa Research Institute where J.J. Jones, Anne Miller and Hiromitsu Sagami are overseeing the awakening of the Maken, an artificial demon. Kei Sagami and Kou Yamashiro arrive after the Maken decides on a name for itself to watch the awakening. During the event, the Research Institute is attacked by the Sangyokai, lead by Hakke Andrey, who kidnaps Hiromitsu and kills Lee Fei Chao, the intended wielder of the Maken before fleeing. In his dying words, Fei Chao urges Kei to take the Maken and save the world, upon touching the sword, Kei is Brain Jacked and her Image is absorbed by the Maken.

After fending off the Sangyokai and subduing Hakke Andrey, Lee Fu Sho calls the laboratory to discover that the Maken has awakened and that the Chief was kidnapped. He instructs the Maken to Brain Jack the captured Andrey to gain his intel on the Sangyokai and Mr. Meteor, and requests that the Maken helps the Fukenshi to defeat the Hakke and rid the world of Mr. Meteor's influence. The Maken, now in Hakke Andrey's body, departs the Institute and boards a plane heading to Moscow to meet with the Fukenshi's second in command, Fukenshi Kati.

Many changes were made to Maken X for its international release. All swastikas present throughout the game are replaced with the kanji 無 (mu), although one poster present inside Club Aeolus in Amsterdam still has swastikas partially obscured behind Marguerite. Several characters had their names changed usually to one that is phonetically similar to their original name, and a few have had design changes. Several stages have had references or bottles of alcohol removed. The Info section that provides information about characters encountered throughout the game, locations and game terminology was also removed although the unaltered card illustrations from the Info section are still present in the data of the western versions.

In terms of gameplay, several stages have had pickups swapped around or removed, and the EX Special meter was altered to charge instantly once the X button is held at the cost of EX Special attacks now draining a small percentage of the Maken's health with each use. The Maken cannot use an EX Special attack if its health is at critical in the western version.

Differences between the original Dreamcast release and Maken Shao. 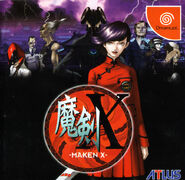 Promotional artwork, used as the cover illustration for the Japanese Limited Edition of Maken Shao