Reverse
"I am Maia... The workings of the Pleiades shining in the heavens shall be yours, bearer of the full moon..."
—Maia, Persona 2: Innocent Sin

Maia is a Persona in the series.

In Greek mythology, Maia is the daughter of Atlas and Pleione and the patron goddess of Nursing mothers. She is the eldest, shyest and most beautiful of the Pleiades, the seven sisters. Her beauty attracted Zeus who bred with her and so she gave birth to Hermes.

"From Greek mythology, the oldest of the Pleiades, the seven sisters who support the heavens. Incidentally, she is not a goddess, but a nymph. She had an affair with the chief god Zeus and gave birth to the god Hermes.
Maia's name holds the meaning of "Grandmother of Magic" and is said to be the Western equivalent to Buddha's mother Maya, who is said to have created the universe."
—Persona World

Maia is the initial Persona of Maya Amano. As a child, Maya was able to conjure her Persona, whom she believed to be a guardian angel. Years later when she and the other main characters are attacked by a group of monsters, she summons her Persona again to protect themselves and learns the ability to invoke her Persona at will ever since. Maia's appearance is overall pink, red and black. Her clothes seems to be a combination of Japanese traditional clothing and the Gothic style. During the arson attack 10 years ago, Maia was able to break her host out of the shrine before the flames consumed her.

If the player let Maya rescue Akari Hoshi in the Sky Museum when it was on fire, after the Mt. Iwato scenario Philemon will grant her Maia Prime for overcoming her pyrophobia.

Despite being Maya's signature Personas, Maia and Maia Prime can be equipped by Yukino, albeit with lower Affinity.

Maia returns as Maya Amano's initial Persona. Following the events of Innocent Sin, Maya has completely forgotten her memories, but she is able to summon her Persona once more when she is attacked by JOKER. Maia's appearance is somewhat changed. Her stats and battle skills remain almost the same, but now excels at the water element instead of the ice element. In Eternal Punishment's universe, Maya was never caught in the arson attack, and so never summoned her Persona until the JOKER attacked her.

Boxart of Maya with her Persona Maia. 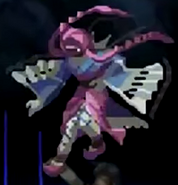