Mahakala is a demon in the series.

Mahakala is relied upon in all schools of Tibetan Buddhism and is depicted in a number of variations, each with distinctly different qualities and aspects. He is also regarded as the emanation of different beings in different cases, though he is best known as a wrathful manifestation of Avalokiteshvara, the bodhisattva of compassion. He is a Dharmapala (Dharma Protector) and one of the eight main Dharmapalas, alongside Yama, Yamantaka, Hayagriva, Vaisravana, Palden Lhamo, Tshangspa Dkarpo and Begtse.

Mahakala is typically black in color. Just as all colors are absorbed and dissolved into black, all names and forms are said to melt into those of Mahakala, symbolizing his all-embracing, comprehensive nature. Black can also represent the total absence of color, and again in this case it signifies the nature of Mahakala as ultimate or absolute reality.

Mahakala is almost always depicted with a crown of five skulls, which represent the Five Wisdoms.

The most notable variation in Mahakala's manifestations and depictions is in the number of arms, but other details can vary as well. For instance, in some cases there are Mahakalas in white, with multiple heads, without genitals, standing on varying numbers of various things, holding various implements, with alternative adornments, and so on.

In Hinduism, Mahakala is a name of Shiva (Great Time), but is also the name of one of Shiva's principal attendants, or ganas. He is also one of Shiva's watchmen, along with Nandi.

In Japan he is called Daikokuten (大黒天*)? and is one of the Seven Lucky Gods. In this incarnation, he is surprisingly less violent and is more benevolent towards humans. He can also possess a six-armed aspect of himself, known as Sanmen Daikoku, a sword-wielding guardian aspect with three heads and six arms. He is also associated with the Shinto god Okuninushi and Dakiniten is also associated with him.

"Origin: India. Another name for Shiva, god of destruction. 'Maha' means 'great' and 'kala' means 'black.' In Buddhism he is called Daikokuten. A misunderstanding in China led to him being known as a god of the kitchen. Some say he was made one of the Seven Lucky Gods due to Okuninushi's reputation. (Okuninushi's name can also be pronounced 'daikoku.') The true Mahakala is nothing like that and looks more like a demon than anything."
—Shin Megami Tensei A-Mode DDS dictionary

"Indian god who repels evil, known as Daikokuten in Buddhism. Its swords are fearsome, but by paying tribute to him, believers may be blessed with tremendous wealth and happiness."
—Persona 4 compendium

Mahakala appears as the ultimate Persona of the Death Arcana in Persona 4. He is available to be summoned once the protagonist reaches Lv 78 and completes the Death Arcana Social Link. Mahakala's fusion prerequisite requires the protagonist to perform a Hexagon Fusion-spread consists of Matador, White Rider, Mother Harlot, Daisoujou, Hell Biker and Trumpeter in the Velvet Room.

"An Indian god who repels evil, known as Daikokuten in Buddhism. His swords are fearsome, but by paying tribute to him, his worshippers are blessed with tremendous wealth and happiness. One theory holds that he is an incarnation of Shiva, the destroyer."
—Devil Survivor 2 compendium

Mahakala as it appears in Last Bible II

Mahakala as it appears in Last Bible Special

Mahakala as it appears in Devil Survivor

Mahakala as it appears in Devil Survivor 2. 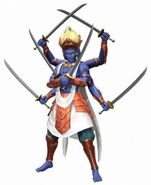