Magatsuhi is a demon found in the series.

Magatsuhi refers to two gods from the story of Izanagi when he had returned from Yomi in a failed mission to retrieve his late consort, Izanami. Since Yomi is the netherworld full of filth (Kegare), after his trip, Izanagi performed the Misogi ritual in order to cleanse the filth of death from his body. The filth that had been washed away became two gods, "Yasomagatsu Hinokami" (八十禍津日神, "Eighty Calamities God") and "Ohomagatsu Hinokami" (大禍津日神, "Great Calamity God"), known collectively as Magatsu Hinokami (禍津日神).

Yasomagatsu Hinokami, also known as Yaso Magatsuhi no Kami, is the deification of the sources of disaster: impurity, ill fortune, misery, evil, etc.

"Yaso Magatsuhi no Kami is the deification of the sources of disaster: impurity, ill fortune, misery, evil, etc... After his return from Yomi, the land of the dead, Izanagi performed a ritual purification to wash the filth of death from himself. Two gods were born from the cast-off filth, one of which was Yaso Magatsuhi."
—Shin Megami Tensei IV Profile

Yaso Magatsuhi is found in the Reverse Hills in Roppongi. The demon releases a sweet-smelling gas that causes hallucinations and fills the entire building. The closer one is to the demon the stronger the gas and thus the reason why all the workers there wear gas masks. Its main use is for Red Pill processing, but is also used to flush out intruders like Flynn's group after they infiltrated the building. After returning to Tokyo upon the route split, Reverse Hills can be revisited and Flynn can get revenge on Yaso Magatsuhi. However, access to the demon can only be obtained by inputting the password 1603. The workers there can understand Yaso Magatsuhi and says it's been complaining about not being able to exercise.

In the battle against him he continues to repeat the same words, only able to express him with his body, showing melancholy to Flynn at the beginning of the battle. He says his name one last time before crumbling, dying peacefully. To unlock him for fusion, Flynn must first go back to Reverse Hills and defeat him, then he must examine the stone that is his defeated remains with the key item, "Hades Soil," in his possession. To fight him, Flynn must re-obtain Key Cards 2-4 by speaking with the Master Samurai at The Hills building in Roppongi after the split. His medium, along with the mediums for the rest of the National Defense Divinities, are obtained by speaking with that same Samurai after the alignment lock.

When the god Izanagi returned from Yomi, he performed a ceremony of purification to get rid of the impurity that had entered his body. Two gods were born from the filth that was washed away from his body, one of which was Yasomagatsuhi/Oumagatsuhi.

It seems that Yasomagatsuhi/Oumagatsuhi is an artificial demon built to be part of the royal guard of a mysterious ancient kingdom."
—Akuma Zensho 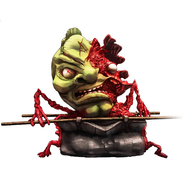