Madame Ginko is a character from the Devil Summoner series.

Owner of Club Cretaceous in Yaraiginza, Madame Ginko knows much about ghosts in society and can only be met during a New Moon. Following the Museum dungeon, she requests the extermination of the ghosts haunting the Toa TV Station.

Overseer of the Kuzunoha clan, she meets the protagonist at the Gouma-Den. She asks him if he will carry out his will with his own hands; when he says yes, she decides to help him in his fight against the Phantom Society. She gives him the Nameless Sword and says his situation is similar to a summoner from three years ago who had no choice but to become a summoner. Ginko explains the history of the Phantom Society and their plans of domination. She also plays a role in making Spooky survive the battle against Satanael. To do so, the protagonist must answer "I don't know" to her inquiry during their meeting, and side with Spooky after reading Kadokura's e-mail.

Ginko is an A-rank BattleNet opponent who appears after winning 23 A-rank battles. Referred to as Mme. Gyn, she is described as being the lovely leader of the Demon Summoners, preferring to fight her battles with dragon demons. After 15 defeats, she gives the player Octorex and after 20 defeats a Lindwurm. 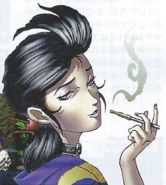