Mada is a demon in the series.

In Hinduism, Mada is the monstrous deity of drunkenness. According to the Mahabhrata, it was summoned by the sage Chyavana to subdue the deity Indra. The story goes that the twin deities Asvin restored Chyavana's youthfulness when the sage rued his aged complexion and compared it to his young wife Sukanya. Feeling grateful, Chyavana told them of a feast hosted by Indra, where the gods would drink the life elixir soma to retain their immortality. Apparently Indra did not allow the twin deities to enter as they had dabbled with mortals for too long.

Saddened, they reported this to the sage, who decided to offer sacrifices to the twin deities to signify their godhood. This infuriated Indra, who attacked the sage with thunderbolts and mountains. Chyavana countered by summoning Mada, who was so enormous that its two sets of jaws could swallow the earth and heavens at the same time. Indra, worried that the gods are still in the heavens, surrendered and allowed the Asvin twins to join the feast.

"A god in Hindu mythology, created by the sage Chyavana. His name means 'intoxication'. He is said to be able to grow so big, he can swallow all of the other gods."
—Shin Megami Tensei III: Nocturne compendium

Mada first appears in the Diet Building as the second guardian of four who block the Demi-fiend's path to Hikawa. Mada guards the segment of the building which has been heavily twisted and installed with trick paintings. If the Demi-fiend gets too close to the tricking gimmick or attempts to open the painted door, Mada will teleport them to a random location within that segment.

In his boss battle, Mada may summon up to two Pazuzus to aid him. Pazuzu is troublesome for his Death attacks but can be effectively hampered if inflicted with Mute ailment (they cannot be petrified due to Death immunity). Mada usually casts Debilitate and then Hades Blast on the Demi-fiend, so Dekunda is a must to negate the debuff effects. Also because his Intoxicate and Pazuzu's Tentarafoo spells both inflict Panic ailment, Mind immunity is best advised to increase their Turn Icon cost.

Mada later appears in regular encounters in the third and highest section of Tower of Kagutsuchi, usually in the formation of 2 Madas with 1 Lilith.

Mada can be summoned by fusing Flauros and Throne together.

Mada appears as an NPC in Third Home as the contracted partner of DB Bacchus. Speaking to him after clearing the Denshi Kairo SHPG Card EV-UB allows players to complete the Thirsting One quest, granting them access to the Ultimate Battle arena in Ikebukuro's Casino. Obtaining the ability to fuse him comes from the Dusk Tale item that drops in Full House boxes or can be purchased from the casino and then turning this item in to the NPC. Mada is fused in a special double-fusion of Nyarlathotep and Dionysus.

Mada can be found as a common enemy in the Temple of Eternity.

"A giant monster in Hindu myth. Its mouth is so enormous that it can swallow all of space, along with all gods. Its name means 'intoxicator'."
—Devil Summoner: Soul Hackers 3DS compendium

Mada is a demon exclusive to the 3DS remake, available after Nemechi evolves into the angel stage of the male growth path, and can be purchased for 500 D-Souls. He is the highest level Vile demon in the remake. Befitting his mythological role, his physical skills depend on his level of drunkenness from consuming sake.

"A giant Hindu monster. Its mouth is so enormous it can swallow the Earth and the heavens in one bite. Its name means "He who Intoxicates"."
—Persona 5 background

Mada starts appearing once the party reaches the 3rd Layer of the Sun.

Mada as he appears in Shin Megami Tensei III: Nocturne

Mada as he appears in Persona 4 The Golden Animation 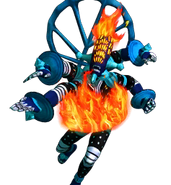 Mada as he appears in Persona Q: Shadow of the Labyrinth

Mada in Persona O.A. (no background)