Louis Cyphre is an enigmatic non-player character who often appears in the Shin Megami Tensei games.

Louis Cyphre presents the demeanor of a streetwise and charismatic gentleman, but in reality is an avatar of Lucifer, with characteristic mismatched red and blue eyes. He is a reliable source for inside information typically found among other nondescript characters in equally nondescript locales. While reliable, he does not give the information freely, as he shows a penchant for riddles.

Louis Cyphre is a mysterious man who appears after the nuclear missiles hit Japan. He appears in a violet business suit with a yellow tie and blond hair and possesses a greater knowledge of what is going on, and he befriends demons easily. In the event the protagonist follows the Chaos alignment path, Louis reveals that he is, in fact, Lucifer, and he congratulates the protagonist for resurrecting the olden gods. He then warns that the "true enemy" still exists. Should the protagonist refer to the Black Moon in the A-Mode DDS Visionary, it is revealed that Louis set up Yuriko to make her become the Chaos Hero's partner.

Louis Cyphre appears as a recurring figure in Shin Megami Tensei II. He is first seen in the bar of Holytown, informing Aleph that Abaddon isn't in the Underworld. He would later appear in numerous places, while often tempting Aleph, to give him hints of demons. At one point Cyphre would give Aleph an invitation, whom appears to be pleased to see Aleph accepting it. However, he appears to be rather surprised to see that Aleph was brought to him without consent. Cyphre then tells Aleph that any of his invitations cannot be ignored, then proceeds to transform into his true from - Lucifer.

In the form of Lucifer, he offers Aleph an alliance to protect his demon world from Satan's judgment. Regardless, Lucifer gives Aleph some time for consideration, then tells him the time of their next meeting would be of Aleph's own will. Later, depending on Aleph's decisions, Cyphre plays different roles: as an enemy or as an ally.

Cyphre would later reappear in the Briatic Passage: he bids farewell to Aleph, for he decides to take Aleph's life away. It is later revealed that it was only Astaroth‎ using Louis' appearance to trick Aleph. Should Aleph choose the Neutral Alignment, Lucifer is later seen to be furious by Astaroth's impersonation. Knowing of Astaroth's defeat, Lucifer again offers Aleph the agreement of forging an alliance with him. Should Aleph choose 'no,' Lucifer would lament that they aren't destined to walk the same path. However, Lucifer himself doesn't want Aleph to be his enemy, and calmly sends him away.

Should Aleph answer 'yes' to forging an alliance with Lucifer, the Alignment rears towards the 'Chaos' path, where Lucifer awaits Aleph in Castle Kether. Louis is last seen observing Seth's awakening, but not before transforming back into his true angelic form.

Despite not being named, Lucifer assumes two different forms: an aged man and a young boy. The old and young Lucifer are seen accompanied, respectively, by a young woman and an old nurse in black mourning garb. The child is first seen in Shinjuku Hospital, where he stares at the protagonist, and whispers something to the nurse accompanying him. However, when the protagonist tries to approach him, he turns away to disappear from the protagonist's sight.

After the Conception, the boy appears to be intrigued by the protagonist. However, in order to allow the protagonist to survive in a now demon-ridden world, he drops a Magatama into his eye, allowing the parasite to merge with him. Subsequently, the Demi-fiend transforms into a demon himself.

As the story progresses, Lucifer often drops hints regarding the nature of the Conception and the world. In the Freedom ending, he warns the protagonist to keep his demonic powers, as his decision to defy the Conception has made God furious. In consequence, the Demi-fiend will suffer the same fate as Lucifer, which means the "true enemy" will go after him in the future.

In the True Demon ending, after defeating Kagutsuchi, Lucifer thanks the protagonist for breaking the cycle of Conception. Notwithstanding, he also states that God would curse him for eternity. However then proceeds to tell the protagonist that even if God would curse him, he, the great demon Lucifer, would bless him. Then in recognizing the protagonist's growing potential exclaims he would like to test the player's limits in a fight. The old and young aspects merge in order to transform into his true demonic form, and the battle ensues.

In Imagine, Louis appears as a blond young woman in a black suit, miniskirt, and glasses.

Louis first appears during the Side B storyline following the main acts consulting with Yamamoto the Steel-Willed and Haruaki in the Central Control Room of Shinjuku Babel. After the player defeats Seth's third form at the end of Side B, Louis will appear and introduce herself to the player and retrieve a orb of light that appears from Seth's body before teleporting away. 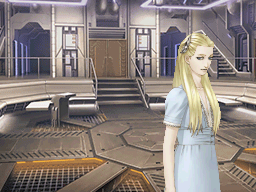 "Humans, born of the God's madness, belong to me. I have no love for them. But neither will I abandon them. That is freedom."
—Louisa Ferre

Unlike the previous titles, Louis appears as a barefoot blonde woman in a blue dress. She wears a goat's head hairclip, and introduces herself as "Louisa Ferre" but before then, she is known as Strange Girl (謎の少女, Nazo no Shōjo)?. She occasionally appears in front the protagonist and speaks cryptically about a "coming storm." At several parts where the protagonist has to choose the path to take in the gameplay, she appears and tells him that humans should do whatever they please and shouldn't simply follow the Lord's order so blindly, leading the protagonist to the Chaos Route.

When The Three Wise Men proclaim their ideal of worldly beauty to be an utterly silent world, devoid of all feelings and passion, Louisa returns to deride their vision as monstrous and foolish, decrying such a world as an empty shell with no true life prospering in it. She instead proposes a complete return to humanity's wild origins, allowing them to achieve ultimate freedom at the cost of the destruction of all worldly order and law. She appears again only if the protagonist chooses the Chaos path, to taunt the dying Mastema after his defeat at the hands of the protagonist, calling him a false angel with only empty hubris, not true freedom. Louisa claims that humans, "born of God's madness," belong to her, and though she bears no love for mankind, she will not abandon them.

Jimenez, at several points in the game, comments Louisa's viewpoints are more attractive to him than the warnings of Mastema, and that her idea of a new world is far more appealing than the world of silence The Three Wise Men propose. This leads him to fully side with her as the envoy of Chaos.

In Redux, Lucifer's child Alex travels back in time to prevent any of the three original endings from happening, as each one leads to a more traumatic outcome for her and the future remnants of humanity. Louisa seems to know of Alex's identity and praises both the protagonist and his companion (Arthur in New Neutral, Zelenin in New Law, and Jimenez in New Chaos) when they choose to see her wish to the very end. After the protagonist and his companion have chosen to help Alex avoid her tragic future, Demeter appears and steals the Fruit which Alex has taken, intending to deliver it to The Three Wise Men and assist them in their return to power. Louisa appears and guides the protagonist and his current companion to the depths of the Womb of Grief, where they find the entrance to the Empyrean Ascent for the final confrontation.

On a New Game Plus where the protagonist has chosen to help Alex change the future, Louisa appears in an alcove of the otherwise featureless lower layer of the Empyrean Ascent. If the protagonist appears and talks to her, she provides a bonus EX Mission and teleports the protagonist to an uncharted region of the floor. She invites him to challenge her four generals - Belial, Lucifuge, Nebiros, and Beelzebub, each of which gives a powerful piece of equipment as a prize for defeating them. Upon completion of this EX Mission, Louisa awards the player with a unique forma for a Sub-App, and states that she no longer has anything left to offer, unless the player wishes to challenge her generals again for sport.

Lucifer makes an appearance in the Tamonten Shrine as a "blonde young man" who appears to serve as a "spark" for Raidou and his actions. He is also referred to as Beelzebub, according to the Mushibito race due to the fact that they see him as a fly, not as a human.

He makes several appearances throughout the game. Typically, he will help Raidou by providing vital information on how to stop the many crises throughout the game. He tells Raidou about the scriptures regarding God's word to man and explains what it has to do with the Abyss opening up above the Capital. Near the end of the game, within the final dungeon, he will make an assessment of Raidou based on Raidou's alignment.

After getting the "Chaos" ending and starting a New Game Plus+ file, Raidou can take Case Files involving the "blonde young man" and end up discovering his true identity while also battling his demonic form. Raidou can also use a Skill demon to transform into Louis after acquiring a lock of his hair. His special ability is to gain money from talking to demons in the Dark Realm.

Early on in the game he spends most of his time at the Shin-Sekai Soda Joint, but later on spends his time at the Catholic Church and Soda Joint. He mentions that he finds Churches to be quite soothing, so he enjoys spending his time in them.

Retrieved from "https://megamitensei.fandom.com/wiki/Louis_Cyphre?oldid=340106"
Community content is available under CC-BY-SA unless otherwise noted.