Lord Nan Dou, also known as Nanto Seikun, is a demon in the series.

Nanto Seikun is the Japanese name for Nandou Xingjun (南斗星君, lit. "Stellar Lord of the Souther Dipper), the Taoist deity of the Southern Dipper asterism. An opposite to Hokuto Seikun, Nanto Seikun is attributed to the element of fire, appearing as a youthful person in fiery robes. Prayers to Nanto Seikun allow a person to prolong their life, averting any disasters that can lead to death and change their luck or fortune.

Nanto Seikun appears with Hokuto Seikun in an optional battle in the Alien Dimension dungeon.

"The Taoist deification of the southern Dipper, part of the Sagittarius constellation.
Like Beidou-Xingjun, he governs the life and death of men, but he has stronger associations with life and is worshiped as a kinder god."
—Devil Survivor 2 Compendium 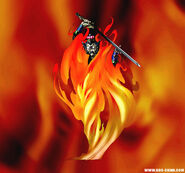