Loa is a demon in the series.

Loa, also known as Lwa or Loi, is an intermediary spirit in Haitian mythology that stands between god and humans that expects to be properly served, not just communicated with. They are each distinct beings with their own personal likes and dislikes, distinct sacred rhythms, songs, dances, ritual symbols and special modes of service. Contrary to popular belief, the loa are not deities in and of themselves; they are intermediaries for, and dependent on, a distant Bondye.

"Origin: Haiti. A spirit from Haitian Vodou. Black sorcerers around Haiti worship the Loa spirit. As with many other spirits, the Loa has no specific form. It is considered soul, and the corpses it descends upon turn into zombies."
—Shin Megami Tensei A-Mode DDS dictionary

Loa can only be acquired through fusion. He can be encountered as an enemy in Ikebukuro's Zoushigiya Cemetery, where he is capable of using previously player-only hex spells.

"A group of divinities worshipped in voodoo religion.
Of the many hidden entities mentioned in religious doctrines, the ones that influence human activities in the earthly realm are known by this name. It is said that those aligned with shadow also possess powerful dark magic."
—Shin Megami Tensei V lore

Known as Sinister Scar in the North American release, he is the boss of floor eight, the Grim Reaper's Cavern.

"A general name for gods and spirits of Vodum. The gods that actually affect human lives are called by this name. Those with negative power are said to be able to kill with a fatal curse."
—Persona 5 Royal background

Loa is the tenth Persona of the Hermit Arcana, and can either be found within Maruki's Palace (from the Warehouse onwards) or otherwise available to be fused after 1/12. As a Shadow, it is known as "Dream-Dwelling Skull." When itemized, Loa normally offers the Ominous Words Skill Card, but when a fusion alarm is active, Loa is instead itemized into the Abysmal Surge Skill Card.

Five Loa appear during the true awakening of Sumire Yoshizawa on 1/12 in Maruki's Palace.

"A group of deities worshiped in voodoo.
They control the forces of nature and influence human activities. Some also have powerful magic used to curse."
—Devil Survivor 2 compendium 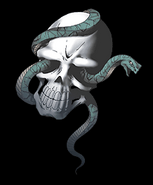 Loa as it appears in Persona 3

Loa as it appears in Shin Megami Tensei III: Nocturne

Loa as it appears in Last Bible II

Loa as it appears in Last Bible Special

Sinister Scar as it appears in Jack Bros.

Loa as it appears in Devil Survivor

Loa as it appears in Devil Survivor 2