In addition, all characters have the option to wear glasses, even for characters that have never worn glasses on record: Teddie wears a bandit's mask, Aigis wears her visor from The Answer, Mitsuru wears sunglasses, Akihiko wears ski goggles, Elizabeth wears reading glasses, and Labrys and her Shadow lower their visors over their eyes.

General Teddie, seen in the beginning of the game and cover art, serves as the tournament's host. Rise is the default operator however the player can complete Score Attack with certain characters to unlock Aigis, Mitsuru, Teddie, Nanako, Fuuka and Yosuke as operators as well. Alternatively, they can be bought as DLC. Each playable character can replace the default male announcer for roll call by completing their respective Arcade Modes.

It is often believed that she is the girl Metis' face was based on, however, this is a misconception, as the girl Metis' face was based according to the Persona 3 Drama CDs (in which she's refered to as "Aigis' mother") was fully paralyzed from birth on, incapable of doing as much as even talk (she later telepathically communicates with Aigis through a data-cable) and was kept in secluded conditions, very much unlike the girl in Labrys' memories.

It is revealed in P3 Labrys Epilogue that she has passed away, but that the experiments she endured allowed for others with the same disease to survive and go to school themselves. Labrys' final words to her is to ask her if she can call her "Mom". 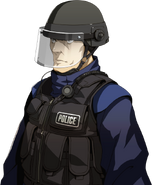