This is a list of minor characters appearing in the Persona 2 duology.

Shunsuke Fujii is a seasoned reporter. Although usually calm and cool-headed, his passion for photography makes him reckless and unyielding in the face of danger. He worked with Masataka Amano prior to Amano's death.

In Persona 2: Innocent Sin, he is first introduced at Yukino Mayuzumi's workplace (and technically his own) as her mentor and love interest. However, because of the intensity of Fujii's passion for photography, he is somewhat oblivious to her awkward romantic advances. Later on in the story, he goes missing after the Fuhrer invades Japan. When the party arrives at the shrine at Mt. Katatsumuri, the Head Monk reveals that Fujii preemptively climbed to the top of the mountain in order to take pictures even with the overbearing danger associated with doing so. He hands one of Fujii's most prized cameras to Yukino before she and the party try to catch up with Fujii to prevent an ill-fated destiny.

It was, however, a fool's dream. After finally reaching the top, the party combat and fell a party of Longinus and find Fujii near a tree, already critically wounded by Hitler's soldiers. Fujii and Yukino share a touching exchange about his passion, ideals, and his optimistic outlook on dreams, particularly his own. Before closing his eyes for the last time, he admits that he wanted to court Yukino before he had died. If the player wishes, Tatsuya can either leave Yukino behind to mourn for Fujii or snap sense into Yukino, telling her that she must carry on in order for Fujii's death to not be in vain. 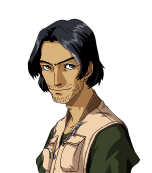 Fujii as he lays dying

Persona 2: Innocent Sin
Garcon Soejima runs Clair de Lune, a restaurant that can be made into a weapon shop by spreading rumors. Similar to the Demon Painter, he is actually based on one of Persona 2's artists, Shigenori Soejima. Appearance wise, he is more muscular and has a more defined jaw than his real life counterpart. He is only seen in-game wearing a bartender's outfit.

After a certain rumor is spread in Persona 2: Innocent Sin, he will sell Maya Amano the Legendary Guns, though only after making her eat a special dish of "spaghetti di kusaya" ("spaghetti horse mackerel" in the fan translation), her least favorite food.

In Persona 2: Eternal Punishment, his restaurant is now located in the new region of Narumi. Once the city rises as part of Ameno-Torifune, the shop will be destroyed with the rest of Narumi until a rumor is spread about its relocation.

Persona 2: Innocent Sin (PSP)
Umiko Shiyama is the class president of St. Hermelin High School's Class 2-3. Appearing in the Climax Theater quest, School of the Heart, she may or may not actually exist as the quest itself is apparently non-canon.

Within the quest, Umiko Shiyama is one of the characters who abuse Ambrosia to become their ideal selves as well as to manipulate innocent teachers into becoming Naozumi Kariyazaki. Unlike the other students, her ideal self does not involve changing her appearance in any manner.

When the party tries to investigate the matter with Rose Futaba for the first time, she is encountered in the Nether-realm as they exit the room, and attacks the party.

Later down the line it is revealed that she, like the other students, were simply manipulated by Musubu Torikiri.

Persona 2: Innocent Sin (PSP)
This unnamed female teacher is a character who appears with only a few lines in the Climax Theater quest, School of the Heart. When the first "Naozumi Kariyazaki" reverts to his original self, the female teacher barges into the room having heard all of the racket. Seizing the opportunity, Class 2-3's students turn her into the new Naozumi Kariyazaki, but she is quickly turned back after Minato confronts Musubu Torikiri and manages to turn around the effects of Ambrosia.
Community content is available under CC-BY-SA unless otherwise noted.
Advertisement