Stephanie Sheh
"Chinyan... Remember me, no matter what...! I love you..."
—Lisa to Tatsuya, Persona 2: Innocent Sin ending

Lisa Silverman is a character from Persona 2.

Lisa is a Caucasian teenager with pale skin, blue eyes and natural blonde hair which she pulls back with red barrettes, leaving a lock of hair falling to her jaw.

A student at Seven Sisters, she wears the female variant uniform: a black sailor fuku with contrast trim, matching socks and white-detailed black athletic shoes, along with an orange ribbon indicating her status as a second-year. Lisa also wears a silver wristwatch on her left wrist.

As a child, her hair was pulled into a short ponytail with a bright red bow, and she wore a robin egg blue dress with puffed sleeves.

"Ever looked around at Japanese ladies these days?! They go to clubs and party all night with guys! I'm doing exactly like you asked!"
—Lisa to her father, after he reprimands her for not being a "proper Japanese lady"

A martial arts fanatic and a fan of Bruce Lee, Lisa uses her own fists to defend herself, equipping gloves to improve the force impact.

She is one of the more popular girls at Seven Sisters High School, and is the self-proclaimed hottest girl in school. She harbors a crush for Tatsuya Suou because she thinks he is hot enough to boost her self-esteem. She holds an obvious crush on Tatsuya, acting clingy towards him and follows him around with little regard to his feelings on the matter.

Despite her appearance, Lisa usually acts cool to those she is not interested in, and even haughty to those she dislikes. This could be caused by the bullying and xenophobia she experienced from the other local children when she was very young.

She rejects the role of a "traditional" Japanese woman imposed on her by her parents, and feels they are forcing their culture onto her. In response, as a form of rebellion, Lisa is learning to speak Cantonese (a form of Chinese) instead of Japanese. She often mixes both languages (often saying "Aiyah!" and other Chinese expressions). Lisa also engages in "dangerous" drug use and compensated dating with "dirty" older men for money.

Despite her natural blonde hair and blue eyes, she is unable to speak English (the misconception that she can is the cause of much confusion and annoys her). Lisa's parents never taught her English for unknown reasons, apparently not understanding its significance and importance as a common language, and she resents herself because of it and is reluctant to admit it. Although Lisa tries to learn English, it comes out in the form of heavy Engrish, and Lisa is concerned she will never be able to perfect it.

She often fights with Eikichi Mishina. Lisa and Eikichi behave in a similar manner to Kei Nanjo and Masao Inaba from Megami Ibunroku Persona in that they are constantly at each other's throats. During a heated exchange, Eikichi nicknames her "Ginko" (gin means silver in Japanese, and -ko is a common Japanese first name suffix for females) as an insult. Lisa's bias against Eikichi also shows if Tatsuya reveals he has eyes for Eikichi, in which she feels he's joking and says that's not funny, while if Tatsuya reveals he has eyes for Jun Kurosu, Lisa is far more accepting and claims he is free to like whoever he wants.[1]

Lisa Silverman is a Caucasian girl raised in Sumaru City by her Japanophile parents. Her originally American father is Steven Silverman, and he loved Japan so much that he applied for citizenship and wants Lisa to be a "proper Japanese lady."

She is the top candidate for "Miss Sevens," a contest held at Seven Sister's High similar to a beauty pageant/popularity contest. The contest is ended as her primarily rival, Yuko, is disfigured by the emblem curse. Lisa and her two friends Sheba and Mee-ho are selected to be in the idol group MUSES by music producer Ginji Sasaki, which is started through a rumor. The song that MUSES sings, with Lisa as the lead singer, and leader of the group, is called "Joker" which encourages people to call the Joker to solve their problems. She then recites a piece from the Oracle of Maia, "the song of a foreign land" portion being fulfilled through Lisa (a foreigner) becoming an idol and singing at a live concert that was highly publicized.

At one point in the game, the group encounters Shadow Lisa. She greets them and instantly starts to taunt Lisa about how much weight she took off her chest after she admitted that she didn't know English. Lisa didn't deny it but the Shadow started revealing Lisa's drug use and compensated dating with older men. The Shadow blames Lisa because her friends Sheba and Miho were dragged into the entire conflict and she was only following Tatsuya because she wanted the status everyone thought she had. Lisa stayed silent, pained in hearing this, but the Shadow continued by saying that Lisa hates being different but in reality she wants to be noticed and that's why she was after Tatsuya, the center of everyone's attention. The Shadow kept saying how selfish Lisa has always been.

Lisa didn't deny it, and admitted that she was a pathetic little girl for a long time, but that she changed and found what she lost. She confronted the Shadow by saying that if the Shadow really is Lisa, that she should remember that her dream 10 years ago was to marry Tatsuya, her first love. However, the Shadow flew into a rage and yelled that the Tatsuya she loved died back then and that he will always be for her. Lisa said that no one will tell her how she feels and that Tatsuya's feelings are his business, but her feelings are hers and that even if he hates her, she will still love him no matter what happens. The Shadow then went berserk and said she didn't care for Tatsuya's feelings, and that he is hers and hers alone, leading to a fight.

After the battle, the Shadow tells Lisa that this wasn't the end of it, and that light and shadow can't part ways from the other. Lisa understands and tells the Shadow that admits she has a place for her in her heart.

Lisa Silverman appears in occasional locations as an NPC, and a metal duplicate of her is encountered late in the game during a boss battle.

In this timeline, Lisa along with her best friends Assachi and Meepo are part of a girl group named MUSES, once again produced by Ginji Sasaki as a front for evil intentions. Sometime much later in the game Lisa is kidnapped (along with childhood friends from Innocent Sin timeline Eikichi and Jun) by Nyarlathotep in an effort to get her to regain her memories from the previous timeline in order to negate Philemon's conditions and thereby destroy the world (like so in Innocent Sin), prompting Maya and her friends to battle their personal demons and return Lisa back home without revoking any feelings of past memories of the previous timeline within her. If Maya and the party save Lisa but she wakes up before Philemon can send her away, she will cry out to Tatsuya (even calling him "Chinyan" as she normally would in Innocent Sin) and beg him to let her come with him before Philemon returns her back to Sumaru City.

At the end of the game, Lisa shows up to the Alaya Shrine, where, if she doesn't remember the previous timeline, meets Eikichi and Jun for the first time, expressing feelings of sorrow as though she's forgetting something; whereas if she does retain the memories, she is seen crying on the steps of the shrine, contemplating over Tatsuya's decision to return to the "Other Side" alone, while leaving his friends in a safe and sound future on "This Side." She shows support in Tatsuya's choices by choosing not to invoke any memories of the "Other Side" into Jun and Eikichi (who both are also of the "Other Side," but have their minds wiped completely clean of those memories), vowing to move on with her life in this current timeline.

Lisa doesn't appear on the show Who's Who, hosted by Trish, but is instead referenced. A 20-year old blonde girl is introduced claiming that her sister was a former idol. Trish is clearly impressed, wondering what it would be like to have a relative like that.

If the player turns the lounge TV on in the correct day, a fitness hostess will give the audience Cantonese lessons by the words Cantonese Lessons Part -- just as Lisa would do so in Innocent Sin.

"I bet that perv's in here! I won't rest until we catch him and I unleash a 15-hit combo on his ass!"
—Before encountering Yasuo Inoe in the gym 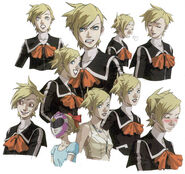 Most of Lisa's different expressions, her childhood self and her Shadow Side.

Artwork from the Innocent Sin remake

Lisa with the group 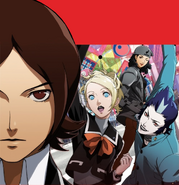 Lisa with the group

Lisa as part of Muses 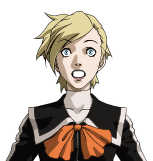 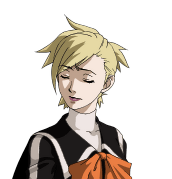 Lisa in her Muses outfit

Child Lisa as Pink Argus
Add a photo to this gallery

Lisa in her Muses outfit

Metal Lisa, a manifestation of Tatsuya's guilt for secretly breaking the pact between his friends
Add a photo to this gallery 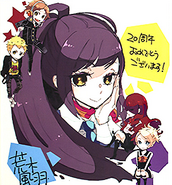 Lisa in the anime trailer

Lisa in the anime trailer

Lisa and Eros in the anime trailer

Retrieved from "https://megamitensei.fandom.com/wiki/Lisa_Silverman?oldid=408676"
Community content is available under CC-BY-SA unless otherwise noted.