Valerie Arem (SMT IV)
"Adam did not eat the apple because he desired it. He ate it because it was forbidden. Now the apple has been set before all of you. Eat well. For just as your friends who became demons by reading books discovered, you will find no love from God..."
—Lilith, Shin Megami Tensei IV

Lilith is a recurring demon in the series.

Lilith was originally a storm demon known as "Lilitu" in ancient Mesopotamian myth around 3000 BC and she was thought to have been the cause of disease, illness, and death. She later appears as a nocturnal demon in Jewish lore.

In Judaism, Lilith was the first wife of Adam, however she was cast out of the garden of Eden for her sinful ways or because she desired to be his equal and refused to obey him. In one tale, she was the first to eat of the fruit of knowledge and wanted to be either equal to or greater than Adam. After she left the garden of Eden, she attempted to create her own garden and became the consort of many different demons, including the fallen angel Samael, and bore many demons including the succubi known as the Lilim.

Meanwhile Adam grew lonely, and beseeched God to forgive Lilith and return her to Eden. God told Lilith that if she did not return, he would punish her by taking away her children. She refused, her children were taken, and since that day she has become a demoness at war with the sons and daughters of Adam, targeting children in specific. It is also said that she chokes newborn babies to death and feasts on their bones. According to one version, she was the one who sent the snake at Eve, and is usually depicted with snakes. In the later years, she became named as the wife of the devil.

Another version of the story as told in the "Midrash Abkier," is that after Cain's homicide brings death to the world, Adam separates from Eve and fasts for 130 years. When the demoness Lilith (also known as Pizna) saw his beauty, she instantly desired him, and took him by force by using his own sin against him. She bore him many demonic spirits known to be a plague to mankind.

"Origin: Israel. The first woman, made alongside Adam. She is a mother of many demons, including Lilim. She has sex with sleeping men and sucks their blood. It is also said that she chokes newborn babies to death and feasts on their bones. One famous theory names her as the wife of Lucifer."
—Shin Megami Tensei A-Mode DDS dictionary

Lilith is the true form of the young woman named Yuriko. Defeating her allows the protagonist to retrieve the Belial Pot she took previously in the game, which can then be fused with a Spirit Sword to create the Karyuken, the heroine's strongest sword.

In the GBA and iOS versions, the protagonist will receive a Visionary Item for defeating her, the Black Moon if the protagonist is Neutral-aligned, and the Lily Bouquet if Law aligned.

Lilith is the demon who rules the World of Envy. She can only be fought only if Tamaki Uchida joined Yumi Shirakawa or Reiko Akanezawa.

"She is said to have been Adam's first wife. Refusing to obey Adam, she left Eden and became a demon of the night. There are several theories of her leaving and fall and they all depict her as unfaithful."
—Shin Megami Tensei III: Nocturne profile

Lilith is the strongest member of the Night race and can be obtained through the evolution of Lilim or recruited in the Tower of Kagutsuchi. Her skillset will be different based on whether she was recruited through negotiation or evolved from Lilim once the Demi-fiend is a high enough level and Lilim has learned all of her skills. A Lilith evolved from Lilim will learn two higher tier skills, Life Drain and Megidolaon, but will take longer to level up to learn them and will not possess the Hell Gaze skill naturally.

Lilith can also be encountered as a random enemy in the Fifth Kalpa of the Labyrinth of Amala.

In the original version's debug mode, there is a cutscene involving Lilith opening an optional dungeon near the Mantra HQ. This dungeon was dropped in favor of the Labyrinth of Amala.

The NPC known as the Shadow Chaser is strongly hinted to be Lilith helping the player to unleash Beelzebub's full potential in the Lord of the Flies quest chain. After completing this quest, players gain the ability to fuse her as a special triple fusion of Vetala, Succubus and Lilim.

"Adam's first wife in apocryphal Biblical scripture. She became a demon after leaving Eden.
There are several theories as to the reasons for her fall, but all note her unfaithfulness."
—Shin Megami Tensei: Strange Journey compendium

Lilith appears as a random encounter enemy on Sector Horologium B4F and onwards.

"Adam's first wife in apocryphal Biblical scripture. She became a demon after leaving Eden.
Adam's wife Eve, according to popular belief, is born in Genesis 2:22. However, in Genesis 1:22, because it says God created woman there, it is believed this is Lilith. Although she is often depicted as a symbol of infidelity, she originally was a Babylonian goddess. According to one legend, she is Samael's wife and was the one who sent the snake at Eve, and is usually depicted with snakes."
—Shin Megami Tensei IV compendium

Lilith turns out to be the true identity of the Black Samurai, also known as Lady Yuriko. If Flynn sides with Walter, Lilith becomes an ally and is unlocked for fusion. If Flynn sides with Jonathan, however, she must be fought as a boss (and is not unlocked for fusion). On the Chaos route, when Flynn regains access to the Eastern Kingdom of Mikado, she will appear briefly at the Monastery before disappearing.

Lilith appears as soldiers alongside the Divine in the battle against Satan in Amnesia's Eden, as well as aiding Beelzebub in Paranoia's Ahrqa.

"Welcome to my boudoir, Mr. Cursed Summoner. I could have a use for you... But if you're hanging around with that girl, then you must still be a little boy. Now, come... I'll show you what a real woman can do."
—Lilith, Devil Summoner: Soul Hackers

Lilith appears in the third Room of Trials at the Corridor of Time. Defeating her is necessary to obtain the Copper Manji.

"Adam's first wife in apocryphal Biblical scripture. She became a demon after she left Eden.
There are several theories as to the reasons for her fall, but all note her unfaithfulness."
—Devil Summoner: Raidou Kuzunoha vs. the Soulless Army devil chart

"Said to have been Adam's first wife. She refused to obey him, leaving Eden to become a demon of the night. All theories of her fall depict her as unfaithful."
—Persona 4 compendium

A Devil Arcana Persona that is specialized in Electricity Skills, Lilith can be obtained via Shuffle Time in Heaven.

"Said to have been Adam's first wife, she desired to be his equal and refused to obey him. She was cast out of Eden and became a demon of the night. She is the mother of the demoness, Lilim."
—Persona 5 background

Lilith is the eighth Persona of the Moon Arcana and can be found as a Shadow in the Depths of Mementos, with the title "Harlot of Desire." She is the first Persona that the protagonist can use in battle to learn Mabufudyne, and one of four Personas to learn Makara Break. When itemized through Electric Chair execution in the Velvet Room, Lilith yields a Mabufudyne skill card. Lilith is required to summon Sraosha through advanced fusion.

Lilith makes her appearance once the party reaches the 3rd Layer of the Sun.

"Adam's first wife in apocryphal Biblical scripture. She became a demon after leaving Eden.
There are several theories as to the reasons for her fall, but all note her unfaithfulness."
—Devil Survivor 2 compendium

Lilith appears as a bonus boss on the 4th Day in the Original Wife event, starting from 14:00. She is seen at the Festival Gate in Osaka, having charmed several men controlling overleveled female demons and sending them to fight the party. Because the men are fighting under Lilith's mind control, the party has to defeat Lilith without defeating any of the charmed men.

Lilith possesses a unique racial ability limited to this fight only: Temptation. At the start of a skirmish, Temptation activates and attempts to charm the opposing team. It always works against male team leaders, unless they are protected by Null Curse, and has a moderate chance of success against anything else. Anything that does get charmed can and will be instantly killed with Death Call.

Fully utilizing Null Curse on the team(s) attacking Lilith can protect against this while netting Extra Turns, and the party's best bet of doing damage to her is through Pierce-enhanced physical attacks. Since the party can't defeat any of the other teams on the map, the easiest way to complete the battle is to deploy only the protagonist and move straight down the center towards Lilith with the aid of an Avian with Winged Flight. If getting a team that's completely immune to Curse proves difficult, Ban Curse can easily stop the Temptation ability.

Defeating Lilith earns the Spell Breaker title and the ability to fuse her in the Cathedral of Shadows.

"Adam's first wife in the Old Testament. She became a demon after leaving Eden. There are various theories as to how she fell, but all agree she is an iconic adulteress. When she rebelled against God, she was cursed to have a snake's tail instead of legs, and often depicted as such."
—Shin Megami Tensei Liberation Dx2 compendium

Lilith as she appears in Shin Megami Tensei

Lilith as she appears in the Shin Megami Tensei: if... novel

Lilith as she appears in Shin Megami Tensei IV

Sprite in the Sega CD remake of Shin Megami Tensei

Lilith in Devil Summoner: Raidou Kuzunoha vs. The Soulless Army

Lilith as she appears in Shin Megami Tensei: Strange Journey 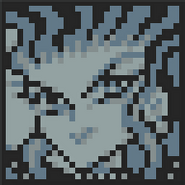 Lilith as she appears in Another Bible

Lilith as she appears in Card Summoner

Lilith as seen in Devil Survivor 2 in her summonable form 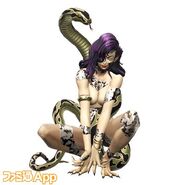 Retrieved from "https://megamitensei.fandom.com/wiki/Lilith?oldid=400158"
Community content is available under CC-BY-SA unless otherwise noted.