Gabriel (A-DDS)
The Law Hero is a playable character in Shin Megami Tensei and, as the name implies, the lawfully aligned hero of that game.

"Law Hero" is not his true name, but rather a title that can be seen in the boss fight against him near the end of the game.

The first appearance of the Law Hero is in an introductory dream sequence of the protagonist, where he is being crucified by a robed man and is freed after the player chooses his name. He appears once again in a second vision, ready to take on the master of Echo Building alongside the protagonist's party, before being seen in the real world in a cell on Kichijoji's Hospital, having been arrested for trying to save his girlfriend, who was captured for having the same name as the heroine. After this, he joins the protagonist and Chaos Hero in their quest to save Tokyo from destruction.

He later leaves the protagonist's party after helping in the rescue of the heroine from a public execution orchestrated by Yuriko, deciding to go to Ichigaya save his girlfriend.

After the events of the Great Cataclysm, the Law Hero appears once again before the protagonist, this time in the Diamond Realm, stating that he was teleported there after being engulfed in a "blinding white light." There, he once again joins the team and accompanies the protagonist back to a post-apocalyptic Tokyo, where they discover that 30 years have passed. They reach Roppongi and reunite with the Law Hero's girlfriend, only to learn that she is actually a spirit and cannot go with them. They then meet the little Alice in the ruins of Roppongi, where a giant dome raised by the mysterious duo, Count Red and Count Black, the rulers of the city, surrounds the town and protects its inhabitants from the nearby demons. After the heroes uncover their plot of using human souls killed in the Great Cataclysm to create a utopia for Alice, they are quickly defeated by Count Red, who reveals his true demon form: Belial. The group then retreats only to come back in possession of the "Glancing Pot," an artifact that enables the sealing of demons. With this, Belial is defeated, which neutralizes his influence over the city, causing the spirit of Alice, along great part of the population of Roppongi, to vanish. This, however, unleashes Count Black's rage, who in vengeance, proceeds to steal Law Hero's soul. After a fight with him, revealing his true persona, Nebiros, the protagonist discovers that his actions cannot undo what happened, and so, Law Hero's spirit must carry on to the afterlife along with the people of Roppongi, permanently leaving the group.

If the protagonist has viewed the silver cup in the A-Mode DDS Visionary, it's revealed that the archangel Gabriel has been watching over the Law Hero, and that he gives the Law Hero a chance to be reincarnated as the Messiah.

Later, he appears in Shinagawa, stating that he was revived by God to be his new Messiah on Earth, with the purpose of guiding the Order of Messiah in the establishment of the Millennium Kingdom. He requests the protagonist's aid in doing so, asking him to go to Tokyo Destinyland and kill the Gaean leader Echidna. If the protagonist chooses not to listen to him, he disappears, letting the angel Haniel take his place and battle the heroes.

The next time the protagonist encounters him, he is arguing with the Chaos Hero near the heart of the Basilica. He tells the protagonist about the Four Heavenly Kings, and after their defeat and the flooding of Tokyo, he request the help of the protagonist in aiding the Messian general, Vishnu, in the battle against his Gaean rival Ravana, who is raising a barrier that is impeding God from coming to Earth. If the protagonist chooses to stay on the path of neutrality by defeating both Ravana and Vishnu, the Law Hero will state that he can no longer wait for him to join his cause, and as such, they will fight as enemies the next time they meet. This happens on the seventh floor of the Basilica, resulting in the Law Hero being killed in a battle against the protagonist. Near his final moments, he realizes that he was "merely a sacrifice... offered to Him..." and dies.

Should the protagonist decide to take the Law path, he is killed in a fight with Chaos Hero at the Basilica. In the ending, it is said that he is in Heaven living with God in peace and prosperity.

"Messiah Zero" as he appears in Shin Megami Tensei II

Law Hero as he appears in the Sega CD version

Law Hero as the Messiah in the Sega CD version

Law Hero after being battled in the Sega CD version

Law Hero as he dies in the Sega CD version

Law Hero in the SMT TCG 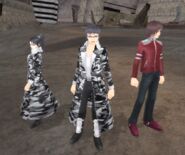