Game Boy
November 19, 1993
Game Boy Color
April 16, 1999
3DS Virtual Console
September 12, 2012
Megami Tensei Gaiden: Last Bible II is the second of four games in the Last Bible series. While the first Last Bible game was released stateside under the title Revelations: The Demon Slayer, this one was only released in Japan.

"Ages ago, people lived on what was then known as the Fifth Planet. They were able to use telepathy, teleportation, and telekinesis powers that were once reserved for gods alone. They called the powers Gaia, and adept users were known as Gaia Masters. Despite wielding these powers, the fall of the Fifth Planet forced them to flee to Terra, the Third Planet, to dwell with the beasts. War soon erupted between the humans and beasts. Both sides fought desperately for control over Terra. In the end, there was no victor. The battles ended up leaving the humans and the beasts decimated. The survivors did not have the strength to keep fighting. They no longer fought for control of the planet. They merely struggled to stay alive. 2000 years later..."
—Last Bible II Introduction

The protagonist Yuri was born and raised in the demon kingdom, and sets off on an adventure after the Demon King asks for his aid to stop the return of Gryas, whose return was prophesied to return with Yuri's birth. 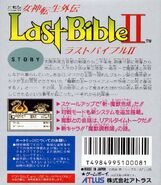 Japanese cover for the Game Boy (back) 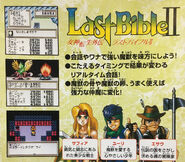 Japanese cover for the Game Boy Color (back)

Illustration for the game