Lamia, also known as Lamiazom, is a demon in the series.

According to Greek mythology, Lamia was a Libyan queen who fell in love with Zeus and bore him children. Hera became enraged and murdered all of Lamia's children (one version of the tale claims that Hera forced Lamia to kill and eat her own children). Lamia went insane with grief and began kidnapping and eating children, eventually turning into a hideous monster as a result. Legend states that Zeus granted Lamia the ability to remove her own eyes at will so she would not see her dead children when she closed her eyes. In some sources, Lamia became a Naga.

"Origin: Libya. Has a woman's body and a snake's tail. The queen of Libya in Greek lore. Hera grew jealous of Zeus's love for her and cursed her. The curse made her devour her children, one after another, as they were born. When she came to her senses, she cursed herself, changing her lower half into a snake. Afterwards, she retreated to a cave, kidnapping children to devour them."
—Shin Megami Tensei A-Mode DDS dictionary

"A monster of Greek mythology. She is usually depicted as a woman from the waist up and a snake from the waist down. She is the child of Belos, son of the sea god Poseidon, and Libye. Lamia was originally a queen of Libya. Zeus was enraptured by her beauty, and his jealous wife Hera, in a rage, slew all the children of Zeus and Lamia and cursed Lamia herself so that her lower half became that of a monstrous snake.
Lamia is sometimes identified with Lillith, the first wife of the Old Testament figure Adam."
—Shin Megami Tensei IMAGINE compendium

Lamia can be contracted in Ueno's Kuchinawa Cave during the daytime hours. She can be encountered as an enemy during the night time there as well as in Mirage's gold-level instance.

"Half-woman, half-snake creatures that appear in Greek mythology and are said to reside in Libya.
They supposedly favor the blood of children and young men."
—Shin Megami Tensei V lore

"A serpentine woman from Greek mythology, she was the queen of Libya. It has a beautiful woman's torso, and a snake's tail. It feeds on the blood of young men."
—Devil Summoner: Raidou Kuzunoha vs. The Soulless Army devil chart

"A serpentine woman of Greek myth, she was the queen of Libya. It has a beautiful woman's torso, and the tail of a snake. It feeds on the blood of young men."
—Persona 3 compendium

"A serpentine woman of Greek myth, she was once the queen of Libya. Zeus's jealous wife, Hera, killed her children, causing her to go mad and transform into a monster."
—Persona 5 background

Lamia is the third Persona of the Empress Arcana and appears as a Shadow in Futaba's Palace and the Akzeriyyuth area of Mementos, with the title" Slithering Snakewoman." Lamia is the first Persona with access to the Rising Slash skill, along with the Foul Breath skill, and one of three to learn the Ominous Words skill. Lamia is the first usable Persona with natural access to the Maragion skill. When itemized in the Velvet Room using Electric Chair execution, Lamia yields a Despair Boost skill card.

"A serpentine woman of Greek myth, she was once the queen of Libya. Zeus's jealous wife, Hera, killed her children, causing her to go mad and transform into a monster."
—Persona 5 Strikers background

Lamia is the first Persona of the Empress Arcana and can be found as a Shadow in the Sendai Jail.

Lamia appears as the first boss within the spin-off game Jack Bros.. She spawns on the third floor in the Forest of Fairies.

Lamiazom can be created through Relic Fusion using the Wafer+Demon+Tusk or Air+Demon+Talon relic combo. Lamia's soul can be found in the Deep Hole and used to resurrect her.

Lamia in Devil Summoner: Raidou Kuzunoha vs. The Soulless Army

Lamia as she appears in Last Bible II

Lamia as she appears in Last Bible Special

Lamia as she appears in Jack Bros.

Lamia as she appears in Persona 3

Lamia as she appears in Persona 5 The Animation 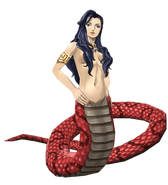