Mick Wingert
"A lot of different people visit this bar, so maybe working here could broaden your perspective."
—Lala Escargot to the protagonist, Persona 5

Lala Escargot is a character from Persona 5. She works as the proprietor of Bar Crossroads (にゅうカマー, Nyukamaa)? in Shinjuku.

Lala has a purple bob haircut, wears blue eyeshadow and red lipstick, and dresses in a black and purple kimono with gold detailing. In Persona 5 Royal, she speaks in a coarse, masculine voice.

Lala is sardonic and quick-witted, but has a kind and motherly disposition. She is often seen attempting to keep Ichiko Ohya's excessive drinking in check and ensures the protagonist's well-being at the bar; she prevents Ohya from trying to give him alcoholic drinks and cautions him about Shinjuku's nightlife, allowing him to leave early if he works for her so he can get home safely.

Lala is a close confidant to Ohya, who regularly visits Crossroads to converse with Lala about her job and her investigation of Kayo. Though they have a playfully temperamental relationship and frequently exchange jabs, Lala is one of the few people who Ohya trusts. If the protagonist pursues a romantic relationship with Ohya, Lala expresses her approval of it.

In the first chapter of Mementos Mission, Lala is briefly seen tending the bar at Crossroads. In the sixth chapter, she admonishes Ohya for attempting to buy the protagonist a drink. 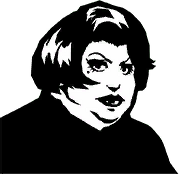