Lakshmi or Laksmi, is a demon in the series.

In Hindu mythos, Lakshmi (Sanskrit: लक्ष्मी, Lakṣmī) is the goddess of beauty, luck, good fortune and love and is the wife of Vishnu and mother of Kama, one of the Trimurti. Lakshmi stands atop a red lotus wearing a robe of lotuses with a lotus in her left hand. She embodies the ideal woman and is said to have charmed many gods with her dance. She is also one of the Tridevi, which consists of Lakshmi, Parvati (Shiva's wife) and Sarasvati (Brahma's wife).

She is known in Japan as Kichijouten (吉祥天*)? as an extra deity in the Seven Lucky Gods who sometimes replaces Jurojin. She was one of the things that rose from the oceans after the Churning of the Sea of Milk. She is also known as a goddess of farming and is called Kisshoten in Buddhism.

"Origin: India. A goddess of luck and prosperity. She is also Vishnu's consort. Lakshmi stands atop a red lotus wearing a robe of lotuses with a lotus in her left hand. She is also known as a goddess of farming and is called Kisshoten in Buddhism."
—Shin Megami Tensei A-Mode DDS dictionary

Lakshmi acts as one of the two law field bosses tied to the Invoke system and will appear in Shinagawa once every hour during weeks when the Law alignment dominates the system. After obtaining the rare item she drops, she can be fused by a special double-fusion of Parvati and Sarasvati.

"In Hindu lore, the goddess of beauty and good fortune. Vishnu's wife and Kama's mother, she is the goddess of love. She embodies the ideal woman and is said to have charmed many gods with her dance."
—Shin Megami Tensei: Strange Journey compendium

Lakshmi can teach Nanashi the Mediarahan, Floral Gust and Sexy Dance skills through her Demon Whisper. She benefits from learning Force, ailment and healing skills.

Laksmi is the highest level Persona of the Priestess Arcana. The Waterlily Petal Material Card is required to summon her.

"In Hindu mythology, the goddess of beauty and good fortune. Vishnu's wife and Kama's mother, she is the goddess of love. Believed to be born from an ocean of milk."
—Persona 4 Golden compendium

Lakshmi can only be created when Marie's Social Link is almost maxed.

"The Hindu goddess of beauty and good fortune, Vishnu's wife and Kama's mother. She is the goddess of love, believed to have been born from an ocean of milk."
—Persona 5 background

Lakshmi is the ultimate Persona of the Fortune Arcana and can only be obtained through fusion in the Velvet Room after completion of the Fortune Confidant with Chihaya Mifune. She is one of three Personas to learn the Lullaby and Life Aid skills and is the highest leveled Persona to learn Climate Decorum. When itemized through an Electric Chair execution, Lakshmi will yield a Life Aid skill card.

"Fame, riches, beauty, and luck. This is one lovely demon who has it all."
—Demonary, DemiKids

Known as Laksmi, she has the power Aroma.

Lakshmi appears before Jin in Fire Book, where she prevents him from leaving the Acheron River. She reveals herself to be an Angel, ordered by Lena, to kill him so that he won't interfere with the Angels plans for Armageddon. In battle she is joined by two Nikes and will heal the group with Media. Upon defeat, she is revealed to be a demon in disguise, calling Lena their most precious ally in the war before disappearing. In Ice Book, Lakshmi can be obtained through rank fusion by fusing a single Ame-no-Uzume seven times.

Known as Laksmi, she begins appearing in groups of 2-3 or accompanied by other demons once the party makes it 4100ft up the Karma Temple. They frequently like to take advantage of their Dormina and Calm Death abilities and if one is alone they will use Rage and may use the two back to back.

Amane has been seen using Laksmi to fend off demons from attacking civilians on the second day. Laksmi's godly appearance gave the civilians a calming presence, making them able to trust the Shomonkai.

"The goddess of beauty and good fortune in Hindu lore. She is a love goddess, wife to Vishnu and mother to Kama.
She is the embodiment of the ideal woman and is said to have charmed many gods with her dance."
—Devil Survivor 2 compendium

Laksmi as she appears in Devil Survivor 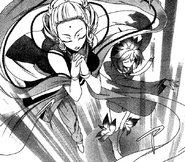 Laksmi as she appears in the Devil Survivor Manga

Laksmi as she appears in Devil Survivor 2 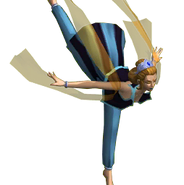 Lakshmi as she appears in Persona Q: Shadow of the Labyrinth

Lakshmi in Persona O.A. (No Background)