Lakhe is a demon in the series.

Lakhe, also known as Majipa Lakhe, is a flesh-eating demon in Hindu, Buddhist and Nepalese mythology. Its myth tells the story of several spirits invading an area called Majipa (in Basantapur, Kathmandu), one of the creatures falls in love with a girl and starts visiting her in the disguise of a human. One day, he is caught and is sworn to never again eat human flesh and protection for the children of Majipa in exchange to be able to live with the girl.

"Origin: Nepal. A man-eating demon from Newar folklore. It usually lives in the mountains, but periodically runs through villages. As it does so, it kidnaps anyone who happens to be outside at the time."
—Shin Megami Tensei A-Mode DDS dictionary 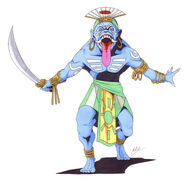 Lakhe as he appears in Megami Tensei

Lakhe as he appears in Last Bible II

Lakhe as he appears in Last Bible Special
Community content is available under CC-BY-SA unless otherwise noted.
Advertisement