Lailah is a demon in the series.

Lailah, also known as Laylah, Layla, Leliel or Laila, is the Jewish Angel of conception along with pregnancy, childbirth and the night.

While not as well known as other angels, she is still a prominent figure on Earth. She was the angel who was appointed to Abraham and is one of the angels to deal with the commander Sisera. She usually is ranked as a Dominion or Seraph.

According to the book "Before You Were Born," she was the angel that brings souls and the seed together and then sees to it that the seed is planted in the womb. In doing so, Lailah serves as a midwife of souls. While the infants grow in the womb, Lailah places a lit candle at the head of the unborn infant, so they can see from one end of the world to the other.

She also teaches the unborn child the entire Torah, as well the history of her soul. Then, when the time comes for the child to be born, the angel extinguishes the light in the womb and brings the child into the world. And the instant the child emerges, the angel lightly strikes its finger on the child's lip, as if to say "Shh" and this causes the child to forget everything learned in the womb. It's implied that the knowledge is still there, but merely forgotten.

Lilith is often compared to Lailah as an evil opposite, seeking to kill newborn children while Lailah seeks to protect them. Lilith wastes the seed and is bent on destruction, not creation. Both are also related to the night. The ending lah is a feminine. Lailah is the only angel with a feminine name and distinctly feminine characteristics.

Lailah can teach Nanashi the Mahamaon, Mediarama, Makakaja and Samarecarm skills through her Demon Whisper. She benefits from learning Light and healing skills.

Lailah is the third demon in the Divine race. She is also the last one that is not unique. Lailah is also the lowest level demon to have Ice Jump or any Jump for that matter.

"An angel in Judeo-Christian lore that presides over conception.
She is the intermediary between pregnant women and God. When a woman conceives a child, the seed is given to God, who then decides the child's sex, appearance, and destiny. After such things are decided, a new soul is placed into the woman's womb."
—Devil Survivor 2 compendium

"An angel in Judeo-Christian lore that presides over conception. She is the intermediary between pregnant women and God. When a woman conceives a child, the seed is given to God, who then decides the child's sex, appearance, and destiny. After such things are decided, a new soul is placed in the woman's womb."
—Shin Megami Tensei: Liberation Dx2 Demonic Compendium 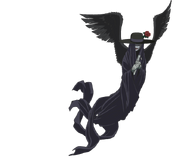 Lailah as she appears in Devil Survivor 2: The Animation

Lailah as she appears in Devil Survivor

Lailah as seen in Devil Survivor 2

Lailah as she appears in Card Summoner