Kellen Goff
"You forfeited any choice in the matter the moment you used my power..."
—Lahmu to Sahori, Shin Megami Tensei V

Lahmu is a demon first seen in Shin Megami Tensei V. In there, he is a vile demon responsible for the attack against Jouin High School and manipulating Sahori Itsukishima to do his bidding.

Lahmu is a type of apotropaic creature from Mesopotamian mythology, attested in both Sumerian and Akkadian texts. The name is derived from an Akkadian word meaning "hairy" or "shaggy."

Like other similar creatures such as Mushussu, scorpion men or bison men, Lahmu were usually imagined as servants of gods, especially Enki, the god of water, and later on his son Marduk, the tutelary god of Babylon, though they were not gods themselves, and their names weren't usually written with the dingir sign indicating divinity. They seemingly served as guardians of waterways and were associated with fishing and domestic animals as well. Early scholarship erroneously identified Lahmu as star gods instead. As apotropaic creatures they were invoked in rituals meant to ward off malign spirits and demons. They were commonly imagined as inhabitants of the mythical underground sea, Apsu, and a number of Lahmu were sometimes described as its guards or doorkeepers.

In various Mesopotamian god lists and incantations documenting genealogies of major gods, especially Enlil, a pair of beings named Lahmu and Lahamu (a feminine form of the name) appear among ancestors of the sky god Anu. They also appear in this role in the late epic Enuma Elish, which identifies them as children of Tiamat, an antagonistic primordial figure absent from earlier sources, and Apsu, in this myth personified as another primordial entity. They play no major role in the narrative, though they are among the gods who bestow Marduk's titles upon him. However, more conventional Lahmu appear among Tiamat's monster soldiers in another section of the myth too. Their defeat at the hands of Marduk was likely regarded as the origin of their apotropaic role. It is presently unknown if the motif of defeat of Lahmu as the source of the creature's role as a servant of gods was known in earlier periods already, though seals depicting battles between Lahmu themselves or between Lahmu and gods are known.

In art Lahmu were depicted as human-like and can be identified by six characteristic curls of hair on their heads. Depictions of Lahmu are sometimes labeled as "naked heroes" in modern literature, and in the past they were commonly misidentified as representations of Gilgamesh.

"A god that appears in Babylonian mythology.
Born from Apsu and Tiamat, he and his sister, Lahamu, gave birth to Anshar and Kishar. Lahmu is at times depicted as a large serpent, but has also been illustrated as a man wearing a red sash with six curls in his hair. Regardless, he is always shown alongside Lahamu and it is thought that together they represent the slit in the sea where Apsu's fresh water and Tiamat's sea water mix."
—Shin Megami Tensei V lore

Lahmu, seeking to become a Nahobino by fusing with another, reached out to Sahori Itsukishima as a faint voice, promising her revenge against her bullies. He and his followers then orchestrate an attack that shatters the barrier separating Tokyo from Da’at. He fights the protagonist personally, but he realizes he cannot win as he had lost his former power. However, he realizes where he can find Sahori, and begins his hunt for her. When his followers start attacking Jouin High School, Lahmu joined the attack personally, killing three angels that tried to stop him. He preyed on Sahori’s hatred towards her bullies to tempt her to seek vengeance, getting her to join him. Under Lahmu's influence, Sahori kills her bullies despite her friend Tao Isonokami's pleas. As she was in his debt, he kidnaps Sahori, taking her with him back to Da'at.

After saving all the students being held hostage in Da'at, the protagonist and Tao find Lahmu attempting to fuse himself with Sahori to transform into a Nahobino in an attempt to "restore his magnificence." The protagonist challenges him to a battle and defeats him, but unbeknownst to Tao who wanted to tend to Sahori, he managed to survive by possessing her body. The entity now has Sahori's appearance yet assumes Lahmu's voice and personality. He almost kills Tao before the protagonist and Aogami protect her, getting themselves killed. Tao sacrificed her life to revive the two, disappearing, with the protagonist approaching the Nahobino, slaying Lahmu together with Sahori. Following this event, Lahmu is unlocked for fusion, and will always appear in his true form when used by the protagonist. He is later mentioned posthumously when Yakumo discusses how demons manipulate their victims and corrupt them as well.

In the first phase of the main boss, debuffs are initially ineffective against Lahmu, as his attacking body cannot be interacted with while other tentacles are still up. As such, Kannabi Veil may be an useful substitute for Tarunda. 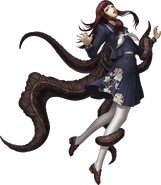