The Lady in Black is a mysterious individual in a black mourner's garb who acts as the attendant and mouthpiece of the blonde man in Shin Megami Tensei III: Nocturne.

She appears as a young woman when with the mysterious old man and as an older woman, leading a silent, blond-haired child around by the hand.

Her true identity is never revealed, but she bears a physical resemblance to Yuko Takao even though the top half of her face is hidden behind her veil. She also hints that she was close to the main character before the Conception and repeats (though inverted) what Yuko says to the protagonist on the rooftop. This is likely a ruse, using figures and words close to the main character to manipulate him into joining her master's cause.

She interacts on behalf of the Old Man and the Young Boy, serving as his mouthpiece for all but the most important moments. She also interacts with the Demi-fiend through the Peepholes of the Labyrinth of Amala, communicating with him to expand his knowledge of the Vortex World, and offering him a place in the legions of chaos, should he desire it, by reaching into the Fifth Kalpa and accepting her master's blessing.

The Old Woman in Black 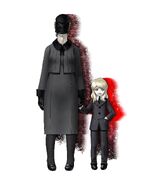 The Old Woman in Black in Nocturne HD