Ladon is a demon in the series.

Ladon was the serpent-like dragon who was twisted and twined in the Garden of the Hesperides and guarded the golden apples in Greek mythology, who was one of the many children of Typhon and Echidna. Heracles had to defeat it in order to accomplish one of his 12 labors. He was killed with a bow and arrow by Heracles. The following day, Jason and the Argonauts passed by on their chthonic return journey from Colchis, hearing the lament of "shining" Aegle, one of the four Hesperides, and viewing the still-twitching Ladon. In an alternate version of the myth, Ladon is never slain, and Heracles instead gets the Titan god Atlas to retrieve the apples. At the same time, Heracles takes Atlas’ place, holding up the sky.

"Origin: Greece. A 100-headed dragon. It was born from Echidna and Typhon and guards the Golden Apple at Hesperides. Ladon stood guard without sleeping, holding back all but the daughters of Atlas."
—Shin Megami Tensei A-Mode DDS dictionary

Ladon lies in the bottommost floor of Ueno and upon defeat drops the Golden Apple needed to get back Cerberus.

"A giant hundred-headed dragon from Greek mythology. It was born from Echidna and Typhon where each of its heads is of a different color and is said to be able to talk. It sleeplessly guards the Golden Apple at Hesperides, which were a wedding gift to Zeus and Hera from Gaia. According to certain accounts, Ladon was killed by Heracles in order to steal the Golden Apples it was guarding by using an arrow soaked with the poisonous blood of a Hydra. It is also said that following its death, Ladon was raised to the heavens by Hera and became the constellation Draco."
—Shin Megami Tensei: Liberation Dx2 compendium 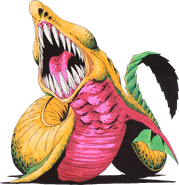 Ladon as it appears in Megami Tensei II
Community content is available under CC-BY-SA unless otherwise noted.
Advertisement