Lachesis is a demon in the series.

In Greek mythology, Lachesis, also known as Lakhesis ("disperser of lots"), was the second of the Moirae Sisters, or Moirae. She was the apportioner, deciding how much time for life was to be allowed for each person or being. She measured the thread of life with her rod. She is also said to choose a person's destiny after a thread was measured.

In mythology, it is said that she appears with her sisters within three days of a baby's birth to decide its fate. Her Roman equivalent was Decima. According to Hesiod's Theogony, she and her sisters (Atropos and Clotho) are the daughters of Nyx and Erebus. In other accounts, they are said to be the daughters of Zeus and Themis as well as several other beings such as Chaos and Ananke.

Lachesis, along with her sisters and Hermes, was given credit for creating the alphabet for their people, forced the goddess Aphrodite into making love with other beings, weakened the monster Typhon with poison fruit, persuaded Zeus to kill Asclepius with lightning, and even aided the gods in their war with the Giants by killing Agrius and Thoas with bronze clubs. Even though Lachesis and her sisters were worshiped as goddesses, their representation of fate is more central to their role in mythology.

Her name Lakhesis, literally means "to obtain by lot, by fate or by the will of the gods".

Kaneko's design for Lachesis and the other Moirae Sisters draws inspiration from the works of British fashion designer Antonio Berardi, who in turn was inspired by French hair stylist Nicholas Jurnjack. The relevant work of Berardi can be seen here.

"One of the three Moirae sisters of fate in Greek Mythology. She is the apportioner, measuring the thread which determines the life span of a person."
—Shin Megami Tensei III: Nocturne compendium

Lachesis and her sisters are the bodyguards of Hikawa, after Ose is defeated by the Demi-fiend. They appear in the Obelisk, setting traps to impede the movements of the Demi-fiend, one of which involves figuring out the sisters' purpose in the cycle of life and defeating the Moirae in that order.

Lachesis acts as one of the three bosses of Nakano's silver-level Stone Site instance. By obtaining the Red Thread of Fate from the endchest, players are able to obtain her plug-in by speaking with the Suspicious Looking Man? NPC. She is a special double-fusion of Lamia and Ocypete.

"One of the three Moirae Sisters in Greek lore.
She is the apportioner, measuring the thread which determines each person's lifespan."
—Shin Megami Tensei: Strange Journey compendium

Lachesis appears in random encounters in the early floors of Sector Fornax.

Lachesis can be found in Camp Ichigaya. She can teach Flynn the Tarunda and Sukunda skills through her Demon Whisper.

Lachesis appears in the Tennozu Shelter with her sisters, Clotho and Atropos. She can teach the Makajam, Rakukaja and Concentrate skills through her Demon Whisper. Lachesis benefits from learning ailment, support and Electricity skills.

Maxing out the Fortune Social Link and fusing Lachesis with her sisters in a triangle spread will create Norn, the most powerful Persona of the Fortune Arcana.

"The middle sister of the three Moirae Sisters of Greek legend. She is the apportioner, measuring the thread which determines each person's lifespan."
—Persona 5 background

Lachesis is the third Persona of the Fortune Arcana and can only be obtained through fusion in the Velvet Room. She is the second of four Personas to learn Mabaisudi, the first Persona to learn Growth 2, one of four Personas to learn Elec Wall and the first Persona to learn Ice Boost. When itemized through Electric Chair execution, Lachesis yields an Ice Boost Skill Card.

"One of three sisters of fate who weaves the threads of destiny to shape life."
—Demonary, DemiKids

Lachesis has the power DarkBoost.

Lachesis as she appears in Shin Megami Tensei III: Nocturne

Lachesis' artwork as it appears in DemiKids

Lachesis as she appears in Shin Megami Tensei IMAGINE

Lachesis as she appears in Persona Q: Shadow of the Labyrinth

Lachesis as she appears in Persona 5 Royal 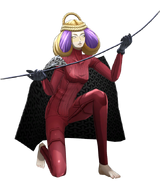 Lachesis as she appears in Persona O.A