Labrys is a mechanical maiden with pale skin, blueish gray hair and piercing red eyes similar to Metis, dressed in Yasogami High's summer uniform which covers some parts of her mechanical body. One of the most interesting features about her design is her head piece which resembles a medieval helmet. There is also the large battle axe which also double as attachable-thrusters to allow her to fly. The thrusters on the axe are propelled independently to give extra controllable momentum to her swings.

Due to her larger Plume of Dusk, Labrys' personality developed quicker than the other mechanical maidens. She is a caring individual who doesn't want to hurt, let alone kill, anyone she cares about. When she thought she was the human student council president, she was serious, strict, and responsible.

The growth of her ego can be observed within Labrys' thoughts. Moments after her first activation, Labrys' thoughts are extremely simple to understand and consist of the usual technical statements. The more Plumes of Dusk she absorbs, Labrys becomes increasingly eloquent and starts to develop emotions, eventually culminating in her friendship with Unit #024. Even more interestingly, this does not apply to her speech that much since she speaks with an accent directly after her activation.

Labrys was originally Unit #031, one of the many models of Anti-Shadow Weapons created by the Kirijo Group to gather test data on Yakushima. Due to her larger than usual Plume of Dusk, #031 began showing signs of emotion upon activation and developed her ego at a quicker rate than the other units. In between being forced to kill her sister units for combat data and inheriting their memories, #031 and the other units were let outside to mingle amongst themselves. Here, #031 meets and befriends Unit #024, an older unit who was more emotionally developed than the others, who serves as #031's only friend alongside Snowy, a white dog that #024 found and cared for. Eventually, #031 is dubbed "Fifth Generation Anti-Shadow Suppression Weapon Labrys" and is ordered to destroy the other units in an attempt to bring out her Persona through mental stress, despite Labrys' protests. Prior to this, #024 told Labrys about her personal goal to find a certain someone, and gave Labrys an archive with orders that she was not to open it until it was all over. Labrys is eventually forced to fight #024, but her attempts to disarm her and spare her life are thwarted when the scientists directly hijack #024's body and force Labrys to kill her. Labrys inherits #024's memories and notices an unusual voice, later revealed by #024's archive to be the girl whose personality was used as the basis of the personality of the early Anti-Shadow Weapons, and that #024 wanted to meet her and thank her for loving them.

After overhearing one of the scientist mention about deleting her 'sentimental memories', Labrys attempts to fight her way out of the facility and escape the island, but only manages to make it to the pier on the beach. Seeing the ocean for the first time, Labrys makes a wish that one of her successors would stand on this pier and find the person they are searching for, and that they would be able to go where she could not. Labrys then willingly surrendered and, due to the damages she inflicted upon the facility, was deactivated instead, but like her sisters, her memory was transferred to all later units, such as Aigis.

13 years later, Labrys would be rediscovered by the Kirijo Group under Mitsuru Kirijo, though after receiving Labrys' "container" from Yakushima, the plane Mitsuru was on was hijacked and Labrys was stolen and taken to Inaba, where she was thrown into the TV. During this time, Labrys dreams of the ill girl she and #024 wanted to meet, and from her gets the idea of becoming a student council president. A voice appears in Labrys' head and shows her an image of Yasogami High School, offering her the chance to go to school and be the student council president. Labrys is brainwashed into thinking that she is the human student council president and that the school she is in is the real Yasogami High School.

In reality, the fake school and the Midnight Arena are actually Labrys' dungeon in the TV World, created by her desire to be understood and accepted as a normal girl and her trauma over being forced to kill her fellow Anti-Shadow Weapons. This caused her dungeon to take the form of Yasogami High School and the P-1 Grand Prix, and allowed her to become the president of the student council of the fake school. She runs into Elizabeth, who attempts to open Labrys' eyes to the truth, and while Labrys fights her off, she is haunted by her words and is reminded of her promise to #024. Once the other Persona users arrive in the Arena and start causing a ruckus, Labrys attempts to stop them, but to no avail. Eventually, Mitsuru and Aigis realize who she is, but she is captured by "General Teddie," actually the Malevolent Entity in disguise, who goads her into rejecting it and fabricated an artificial ego of her to break the Persona user's Personas and absorb them.

After the Shadow is defeated by the player, Labrys accepts her flaws with the help of both the Shadow Operatives and the Investigation Team and receives her own Persona, Ariadne. Despite the incident being seemingly resolved, Labrys' mind is suddenly hacked for a moment by the human culprit outside the TV, and is controlled by the culprit/ordered by the Malevolent Entity to attack the player, before being freed by either Fuuka or the player fighting off Labrys. Afterwards, Labrys joins with her sister Aigis and the Shadow Operatives, vowing to find whoever did this to her and the others, though she and Aigis also vow to find the girl she and #024 wished to meet. Aigis also reveals that Labrys' wish came true as Aigis met the hero of Persona 3 on the same pier, being able to leave the island.

In terms of gameplay, Labrys is quite similar to Akihiko. She is a heavy offensive character that operates based on momentum. Unique to Labrys, she gains more power based on her axe tiers that increase the more she attacks with her axe, blocked or not. When it reaches red, all attacks utilizing the axe cause Fatal Counters (even when not on counter hit) and do the maximum amount of damage with which even her auto combo can reach extremely high damage. Her persona can also help in that regard setting up traps and gives her a small zoning gain. But while her attacks can do heavy damage, they are typically slow and has a lot of recovery. Fortunately, like Akihiko, Labrys does not rely too much on her Persona, making Persona Breaks not much of a problem for her. Also, because of the nature of her axe mechanic, she does not want to be put on the defensive as it causes it to cool off losing some potential damage.

Her leitmotif is "Spirited Girl." The OST disc adds small extra instrumental emphasis to the theme.

Labrys is the 12th and penultimate character the player faces in Score Attack. Labrys will always be in the maximum axe tier and thus her damage output will always be extremely high.

A desperate Labrys, along with Mitsuru's maid, Kikuno, as well as Detective Kurosawa, requests Yukari and Ken's assistance after her sister, Aigis, is captured alongside Fuuka, Mitsuru and Akihiko. Upon arriving in Inaba via helicopter, Yukari and Labrys watch in horror as they witness the town become engulfed in a mysterious red fog.

At the beginning of P3 Story mode Labrys is being repaired in a Kirijo owned base. It is revealed that she was designed with a sub network within her mind, which Fuuka theorizes was in order to incorporate her sister units into her after they were killed. This allowed her other self to continue existing by residing in the sub network. Her mind is also revealed to only view things as data if it is downloaded into her. Only by explaining things to her can she understand it.

During her story mode, Sho Minazuki reveals himself as the "Eerie voice" who hacked Labrys via the use of her old manual control remote in Arena. He attempts to do so again, only for it to backfire when Shadow Labrys reawakens and usurps control from him, destroying the remote and driving him off before returning to sleep, content that her real self is finally free from the Kijiro Group's control and having come to respect (or at least not hate) Mitsuru.

She is the one who defeats the Malevolent Entity and saves Sho. During the ending she visits the grave of the girl who her personality is based on. There she meets a boy who suffers the same illness as her, who was able to live thanks to the experiments she endured. Labrys asks as she looks upon the grave if she could call her mom.

Labrys' name is a term for a symmetrical doubleheaded axe from Crete in Greece. This is the form her weapon takes. In addition, some variations on Athena's birth story tell that the goddess was born from Zeus' forehead when cleaved with a Labrys. This version of the myth also holds that Athena was born from a headache Zeus incurred after consuming Athena's mother, Metis. This myth has likely been applied to reflect the relationship between the three anti-shadow weapon girls of the same names in Persona 3 and The Answer.

Furthermore, the word "labyrinth" is derived from the word "labrys" due to the double-axe motifs in the archecture of the maze-like Knossos Palace on Crete. This temple served as the inspiration for the Greek legend of the Labyrinth, the maze in the story of Theseus, who was given a sword and a ball of red wool by Ariadne. The antagonist in this story is the minotaur, who also serves as Shadow Labrys' Persona Asterius in Arena. 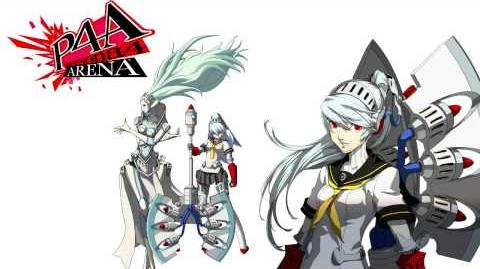 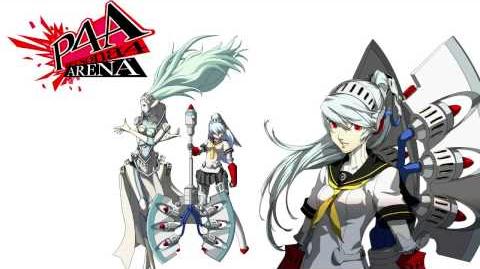 Retrieved from "https://megamitensei.fandom.com/wiki/Labrys?oldid=348496"
Community content is available under CC-BY-SA unless otherwise noted.