Matthew Mercer
Kyouji Kuzunoha is a character from the Devil Summoner series.

Kyouji Kuzunoha appears as a detective who owns the Kuzunoha Detective Agency. He is often accused of being behind crimes that involve demons, especially by Hideo Momochi. After his unknown death, the protagonist possesses his body after escaping from Charon. Kyouji later possesses Takashi and aids the protagonist during some of the investigations. In the Fake Astral Plane dungeon, he replaces Rei Reiho.

Sukeroku appears after the protagonist and Nemissa defeat the demons Finnegan summoned to kill them. He mentions that Finnegan has a built body, and he would like to have one like that in the future. He talks with them and asks if they had seen his partner Rei, and when questioned about what their relationship is he says that it is complicated. He decides to leave, sure that they will meet again soon since they are both fighting the Phantom Society.

He later appears in the Corridor of Time to act as a witness to the trials and explains that the area is meant as a place to test Summoners. He can also save the game.

In between Soul Hackers and Persona 2, Kyouji Kuzunoha possesses the body of Daisuke Todoroki, turning him from small-fry gumshoe to big-time detective in Sumaru City. Aside from his usual trades, he also spreads rumors for a fee. Tamaki Uchida serves as his assistant.

Kyouji as he appears in the Shin Megami Tensei: Devil Summoner novel 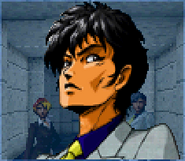 3D model found inside the disc of Raidou vs. The Soulless Army

A more refined 3D model found inside the disc of Raidou vs. The Soulless Army

Akihiko as Kyouji Kuzunoha in Persona 3: Dancing in Moonlight