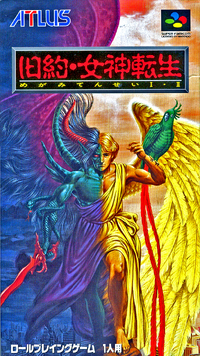 Kyūyaku Megami Tensei: Megami Tensei I - II (旧約・女神転生I-II; literally Old Testament Goddess Reincarnation: Goddess Reincarnation I - II) consists of Megami Tensei and Megami Tensei II being updated and ported to the Super Famicom. It was released only in Japan in 1995 after If... and on the heels of Spiral Nemesis. However Atlus did not take too many liberties with the original gameplay. A few portions of the dungeons of the first game were redone, along with a new save game and teleportation terminal feature which previously did not exist. The graphics and music were enhanced to match the capabilities of the Super Famicom.