Kuzuryu is a demon in the series.

As his name suggests, he is depicted commonly as a nine-headed dragon. One famous legend about the Kuzuryu is the Hakone Kuzuryu legend, which is similar to that of Yamata no Orochi. According to the legend, the nine-headed dragon had settled in Lake Ashi in Hakone, where it demanded a sacrifice.

The Kuzuryu appears as a super-weapon which YHVH commanded Lucifer to use. He demanded that he launch all nine heads to destroy the world. Lucifer, presumably outraged, disobeyed him and fired only one of its heads to destroy Tokyo Millennium. Aleph must fight it after defeating Lucifer in the Neutral path, as Kuzuryu will go out of control and destroy everything after Lucifer's death. 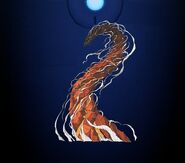