The Kuzunoha (葛葉) are a clan of devil summoners who protect Japan from a myriad of otherworldly, supernatural, and demonic threats, and have been in service to the country for almost 1,200 years, dating back to the days of the Asuka era.

The heads of the clan hold the title of one of the four Kuzunoha "families", passed down to those who show exceptional talent in the art of Devil Summoning, yet are not necessarily passed on to those with blood relation, i.e Geirin and Raidou. Side branches such as Kyouji can also pass down their title.

There are four different main family titles in the Kuzunoha Clan, yet as of the second installment of the Raidou Kuzunoha series, only two out of the four titles have been revealed.

Kuzunoha is the name of a popular fox spirit of Japanese folklore, and is closely connected to the legends surrounding famed Onmyōdō Abe no Seimei. In the legend, the father of Seimei, Abe no Yasuno was visiting a shrine in Shinoda when he came across a hunter who had trapped a white fox in order to take its liver to sell as medicine. Abe no Yasuno fought off the hunter and saved the white fox, but not before sustaining serious injuries to himself. In the aftermath, he is saved by a mysterious, enchanting woman named Kuzunoha and the two eventually fall in love and get married.

Later, Kuzunoha gave birth to Abe no Seimei, who was born with strange powers, and by the age of five, he was said to be able to to see and command lesser Oni. One day, when Abe no Seimei was still a child, he noticed his mother possessed a fox's tail under her kimono. Realizing her disguise had been found out, she fled her home and returned to Shinoda; her husband and son pursued her and she revealed she was the very same white fox that Abe no Yasuno had saved many years ago. Kuzunoha gives her son a special book that will allow him to speak with beasts, and bids farewell to her family, never to be seen again. Her famous farewell poem can be found on a silk parchment in the Inari Shrine in Izumi. 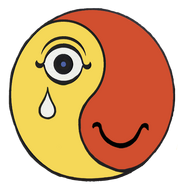 Symbol as seen in Devil Summoner 2: Raidou Kuzunoha vs. King Abaddon
Add a photo to this gallery
Retrieved from "https://megamitensei.fandom.com/wiki/Kuzunoha?oldid=403793"
Community content is available under CC-BY-SA unless otherwise noted.